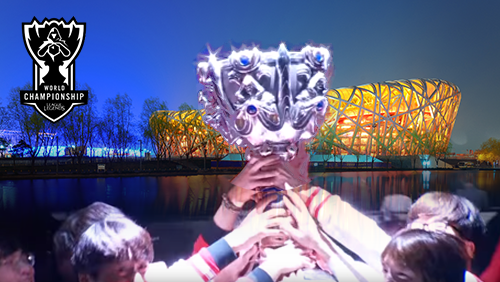 This is a guest contribution by Florian a long time eSports enthusiast and co-founder of Esports-betting.pro. If you would like to submit a contribution please contact Bill Beatty for submission details. Thank you.

The TI7 of Dota 2  has concluded only 6 weeks ago and it’s already time for the next eSports highlight in 2017: The League of Legends World Championship, also known as LoL Worlds. While League of Legend’s publisher Riot Games will most likely not be able to compete with the more than 20 million dollar prize pool of the TI7, they should be able to beat their main competitor in the MOBA business once again when it comes to viewer numbers. The finals of last year’s World Championship were watched by 43 million people peaking at 14.7 million concurrent viewers. That’s even more viewership than the finals of the NBA had that same year. And keep in mind that that’s only the finals – in total, LoL fans from all over the globe watched over 370 million hours of eSports footage over the course of the event. So let’s take a closer look at what’s about to happen at this year’s LoL Worlds, before we dive into the different betting markets for the competition. If you are not familiar with eSports and League of Legends at all, you can take a look at the highlight video of last year’s Worlds below to get a feel of what is going on here.

The 7th edition of the tournament is held in China after its stops in the western hemisphere last year in North America, and the year before when LoL Worlds 2015 was held in Europe. This year, Riot Games introduced a new format, which expands the number of competing teams from 16 to 24 by adding a new “Play-In Stage” to the schedule. This gives teams from outside of the big LoL regions in Europe, North America and Asia a fairer shot, and it also increases the number of matches, which will certainly have an impact on the overall watched footage of the tournament. Even though the time shift makes it harder for fans in the western countries to watch the action live, the biggest fan base of the game has always been in Asia, so we will most likely see an increase in the viewership numbers once again. The tournament is starting on the 23rd of September with Play-In Stage #1, and running through the 4th of November were the grand finals will be played in the National Stadium of Beijing with a capacity of 80,000 fans. All the matches of the competition are broadcasted for free on various online platforms like YouTube and Twitch. You can find the full schedule, view all the teams and much more in this overview of the tournament. Worlds overview here.

As mentioned before, the prize money might not be as high as that of the TI7. However, it is expected to exceed last year’s total prize pool of 6.7 million US dollar. Riot Games alone adds a little more than 2 million dollars to the prize pool, while the rest is financed by certain in-game purchases of LoL players during the course of the event. Therefore, the exact amount will only be known after the World Championship is over.

The varity of betting markets is huge

Since Riot Games does not offer an API to transfer in-game items out of the client, League of Legends is one of the eSports that have no problems with unregulated skin betting platforms unlike CS:GO or Dota 2. But this does not mean that there is no betting scene in LoL – users that would like to bet on Worlds 2017 can choose from a great variety of licensed operators who offer bets for the event. Besides normal match bets, there is a variety of special betting markets ranging from outright winner to handicap bets, in addition to the immense amount of special bets on events that might occur during the games. Even markets for which champions get chosen or banned the most are available at the platforms that are really dedicated to eSports betting. Besides, this live betting will be offered by several operators for all matches of the tournament. This makes sense because most users are in front of their computers and handheld screens while watching the games, so the possibility of placing a live bet is literally only a couple of clicks away. Since the interest in betting on eSports and League of Legends in particular is growing rapidly, I can only encourage all operators to look deeper into this matter, or you might miss out on a great opportunity elsewise. I hope I was able to give you a good pretaste of LoL Worlds 2017 – and as we eSports nerds say: GG and HF!

Florian was born in the early 80’s and grown up with a C64 and Amiga and a long time eSports enthusiast and co-founder of Esports-betting.pro.