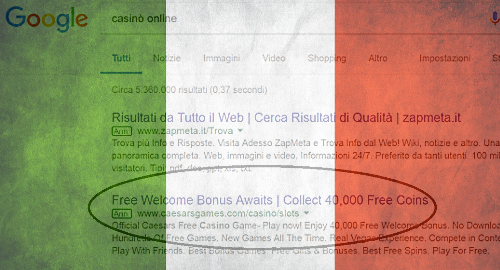 Italy’s gambling advertising ban has already had an effect on Google search results, achieving the exact opposite of the government’s stated goals.

On Monday, search engine giant Google updated its policy page in accordance with Italy’s so-called Dignity Decree and its prohibition on nearly all forms of gambling advertising and sponsorships. Google’s notice reminded operators that, as of July 16, “only state lotteries with deferred drawing will be allowed to run gambling advertisements in Italy.”

While the Decree’s full effects won’t take effect until January 1, 2019, Italian gaming news agency Agimeg reported that Google’s notice has already resulted in Italian-licensed operators dropping down local search results, while international operators that serve the market without a local license have risen to the top.

Some operators, such as Stanleybet CEO Giovanni Garrisi, believe the Decree will be “changed at the parliamentary level.” And indeed, this week saw the Senate and Chamber of Deputies Studies Service submit a report suggested that the Decree’s absolute prohibition “does not appear compatible” with existing legislation upholding the legality of most gambling advertising.

Maarten Haijer, head of the European Gaming & Betting Association (EGBA), suggested the European Commission would step in if Italy’s parliament failed to act. In a letter sent to Brussels, Haijer claims Italy goofed by failing to notify the EU regarding the Decree, which should have been subject to the standard three-month ‘standstill’ period, an omission that Haijer claims renders the Decree moot under EU law.

DI MAIO UNREPENTANT
Luigi Di Maio – Italy’s Deputy Prime Minister and champion of the Decree’s gambling smackdown – was challenged on a live TV debate this week by Vincenzo Boccia, president of the General Confederation of Italian Industry (Confindustria), regarding the effect the Decree would have on Italy’s gamblers.

Di Maio rejected Boccia’s suggestion that the Decree would achieve the opposite of its stated aims, saying that “I cannot be told that since I have eliminated the advertising of gambling, the illegal advertising is promoted. It is not.”

OPERATORS BITE BACK
Italian-licensed operators have expressed near-unanimity in their rejection of the new government’s approach. Kindred Group’s local head of gaming Cristiano Blanco called the ad ban “putting the dust under the carpet” while “delivering the [online game] to unauthorized operators.”

Alejandro Pascual, director of European operations for Spanish operator Codere, told InfoPlay that his company agreed with the Italian government’s objectives, but its methods “are not the most suitable” to achieving those objectives. Pascual claimed to have “repeatedly” invited government reps to engage in dialogue but “all of them have declined the invitation.”

Meanwhile, Massimilano Casella, CEO of Italian operator Microgame, issued a blistering statement via his Facebook page saying the government was treating gaming operators like “plague victims… with whom it is better not to deal with.” Casella said he was “astonished, embittered and worried about my employees, customers and users.”

Casella said that, as a responsible gaming operator, he recognized that “our industry, our companies grow if everyone plays one euro, not if a few sell the house to play.” Casella said he wanted to “work side by side” with the government to battle problem gambling, but this couldn’t happen “if our interlocutor is blind and deaf.”

Casella also mocked the government’s claims to care about gamblers, pointing out its plan to make up the expected tax shortfall from decreased online gambling by increasing taxes on land-based slots and video lottery terminals. “Is this the brilliant solution to stem this sad phenomenon?”

Casella closed his rant by suggesting that all Italian-licensed operators enact a “shutdown of all activities for 24/48 hours” to draw attention to the situation. Casella said the experience and skills of online operators “must and can be used for better regulation of the game.”