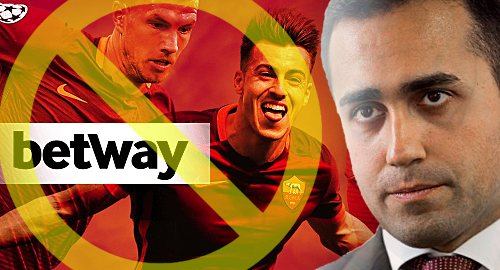 This week saw online gambling operator Betway ink a three-year betting partnership with Serie A club AS Roma, while Marathonbet inked a new €7m shirt deal with Lazio. But these deals fly in the face of Italy’s new Dignity Decree, which will ban all gambling advertising and sponsorships starting January 1, 2019.

But Thursday saw Minister of Labor and Economic Development Luigi Di Maio (pictured) pour cold water on these deals, telling the Il Fatto Quotidiano media outlet that any advertising contracts entered into “between the approval of the Dignity Decree in the Council of Ministers and its publication will not be valid.”

The Council of Ministers approved the Dignity Decree on July 2, so Di Maio appears to be saying that neither the Betway nor Marathonbet deals are legally sound. At any rate, Di Maio added that the Decree required the scrapping of all existing advertising and sponsorship contracts by June 30, 2019.

The Decree is scheduled to arrive in Italy’s House of Representatives on July 24 and is expected to be approved two days later. The possibility remains for the Decree to undergo further modifications before passage, and representatives of the gaming industry, broadcasters and sports bodies are mounting a frantic last-minute push to at least minimize the damage.

On Tuesday, the General Confederation of Italian Industry (Confindustria) presented a plan that would significantly curb gambling advertising without imposing an all-out prohibition. But Di Maio’s response was unequivocal, saying he was “sorry for them, but I do not change my mind.”

Di Maio insisted that the advertising ban “will not destroy the legal gaming sector” and that sports bodies and media outlets’ lost advertising revenue “will simply be replaced by those of other industries, as was the case when tobacco advertising was banned.”

BERLUSCONI V. DI MAIO
Former Italian PM Silvio Berlusconi, who now heads up the Forza Italia party and continues to run a vast media empire, has become increasingly strident in his objections to the advertising ban.

Berlusconi penned a public letter this week saying the ad ban was an attack on Italy’s entrepreneurs and demonstrated that the new coalition government didn’t understand “the real economy.” Berlusconi also accused the coalition of having no original ideas, forcing them to adopt “rigid, bureaucratic and nineteenth-century” views that have long since been discredited.

Di Maio responded to Berlusconi over his Twitter feed, saying Capt. Bunga Bunga was riled up because the coalition has “protected the interests of the weak and not those of the gambling lobby so dear to” Berlusconi’s Mediaset television business.

SLOTS, VLTs SHOULDER THE LOAD
The new government has acknowledged that its tax coffers will take a hit from the gambling ad ban through lost value added tax, with an estimated hit of €147m in 2019, rising to €198m in 2020. However, the latest draft of the Dignity Decree plans to increase the tax rate on slot machines and video lottery terminals (VLT) to help make up the shortfall.

The tax hikes have already been met with howls of protest from retail gaming operators, and Armando Iaccarino, director of the Centro Studi AS.TRO, said the government’s new policy appears to have been arrived at “without a minimum of economic analysis of the consequences” and would make the survival of Italy’s slots and VLT operators “difficult, if not impossible.”