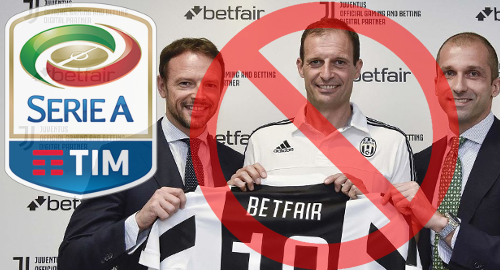 Italian sporting bodies and broadcasters are predicting the apocalypse if the country’s new coalition government follows through with its ban on all gambling advertising.

On Monday, Italy’s Council of Ministers approved the latest draft of the government’s so-called Dignity Decree. The text, which must be approved by the full parliament within 60 days, calls for a total prohibition on all gambling advertising and sponsorships as of January 1, 2019, with all existing deals to wrap up by June 30, 2019.

Reaction from Italian-licensed gambling operators has been harsh, while the Serie A top-tier football league issued a statement on Thursday expressing “extreme worry” for its financial future, given that 12 of its clubs had some kind of partnership with a gambling company in the 2017-18 season.

The league further claimed that cutting off this important revenue stream “would bring competitive disadvantages to Italian clubs, directing abroad advertising budgets meant for our teams.”

Enrico Preziosi, president of Genoa FC, called the prohibition “madness” and said the government didn’t understand the “devastating effects” the ban would have on local football. Preziosi also predicted that the ban “wouldn’t even resolve” the problem gambling issues the government claims the ban is meant to address.

The European Gaming & Betting Association told the Associated Press that the gambling industry contributed an annual €120m to Italian sport, adding that Italian fans will still be exposed to international football teams’ gambling sponsorships due to “the cross-border nature of the internet and television.”

Italian broadcasters are also facing a major hit from lost gambling ad revenue. Former Prime Minister Silvio Berlusconi, who owns the Mediaset broadcasting firm, was said to have freaked out when he first learned of the coalititon’s advertising plans in May.

Asked this week whether it was true that Mediaset could suffer a 50% cut in its advertising revenue from the ban, Berlusconi said only that he would reserve comment until the Decree was voted on by parliament.

There is a strong likelihood that the Decree will undergo amendments as it progresses through parliament. Even Interior Minister Matteo Salvini, who called the Decree’s gambling curbs “a good start,” acknowledged that parliament will have its say on the Decree’s final language. Expect some fierce lobbying by both sides of this argument over the next two months.