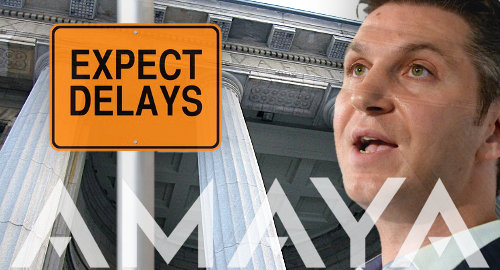 Former Amaya Gaming CEO David Baazov’s date with judicial destiny on insider trading charges will have to wait a while longer.

On Wednesday, La Presse reported that the Court of Quebec had postponed the start of Baazov’s insider trading trial until April 16. The trial was supposed to have got underway next Monday (26) but Baazov’s legal team requested more time to consider the Crown’s evidence against their client.

Baazov and two other individuals – fellow Amaya exec Benjamin Ahdoot and longtime Baazov adviser Yoel Altman – were hit with 23 criminal charges of insider trading in March 2016. The trio stand accused of illegally enriching themselves and others via engaging in stock transactions related to unannounced Amaya transactions, including the company’s 2014 acquisition of the parent company of online poker giant PokerStars.

The trial was originally scheduled to start last December, but was postponed so Judge Salvatore Mascia could consider Baazov’s attorneys motion that the charges be stayed due to the length of time it took for Baazov’s case to come to trial.

Last month, Masica dismissed the motion, saying that “it was very close at home plate” but he nonetheless accepted the argument of Quebec’s securities watchdog, the Autorité des marches financiers (AMF), that there was sufficient justification for allowing the trial to proceed.

Baazov’s legal team also objected to the AMF’s delays in disclosing evidence it intends to use against their client, then dumping millions of pieces of evidence – much of it unrelated to the specific charges against Baazov – just weeks before the trial was scheduled to commence.

Mascia’s decision to postpone the trial’s start appears directly related to these concerns. A Baazov spokesman told La Presse that the legal team was still sifting through the evidence and had concerns that the number of pieces of evidence “could increase as the data is analyzed.”

Assuming the trial does meet its latest post time, the proceedings are estimated to take up to 70 days, setting a four-days-per-week pace. As such, court proceedings may not wrap up until September, and the timeline for a verdict remains anyone’s guess.

Baazov stepped down from his Amaya corner office in August 2016, and eventually sold off the bulk of his significant Amaya holdings after several failures to buy the company and take it private. Amaya rebranded as The Stars Group last June.