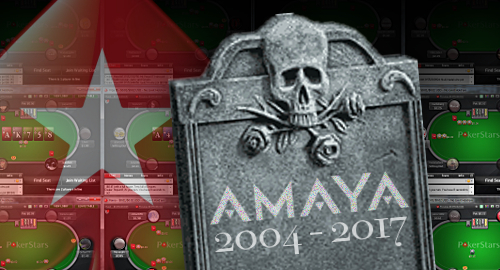 Amaya held its last annual general meeting in Montreal on Wednesday, at which shareholders approved the company’s plan to rebrand its operations to better reflect the dominance of its flagship PokerStars brand. The brand switcheroo is expected to be a done deal by the end of August.

It’s been suggested that Amaya’s desire to rebrand is also intended to distance itself from any lingering association with Amaya’s former CEO David Baazov, who is awaiting a November trial on criminal charges of insider trading related to Amaya’s 2014 acquisition of PokerStars parent company, the Rational Group.

The Canadian Press quoted Amaya CEO Rafi Ashkenazi saying the brand rejig wasn’t due to Baazov having ‘tainted’ the Amaya brand, but merely reflected the company having shed its non-core operations in recent years to better focus on growing the PokerStars business. (Regardless, putting distance between the company and Baazov’s ongoing scandals probably doesn’t hurt.)

Amaya’s new head office comprising around 20 key staff will start to take root in downtown Toronto in July, with the full HQ move expected to be finished by August. Another 300 Amaya technology staffers are already plying their trade in Richmond Hill, a suburb north of Toronto.

Amaya says its Montreal presence will be reduced to a small finance team in Griffintown comprising about 15 staffers for the time being, and Ashkenazi told La Presse that if CFO Kyle “wants to revise the way the Montreal office is structured, he can.”

Last week, Amaya added another new name to its executive ranks by the appointment of former Playtech and Scientific Games veteran Jerry Bowskill as the company’s new chief technology officer. Ashkenazi was himself a Playtech veteran before joining the Rational Group in 2013.

Ashkenazi called India “quite an exciting market” based on its population of 1.3b souls and its high smartphone penetration. Ashkenazi estimated that India’s online poker market could be worth up to $150m in a few years and suggested Amaya/Stars would eventually be “as usual the market leader when it comes to poker.”