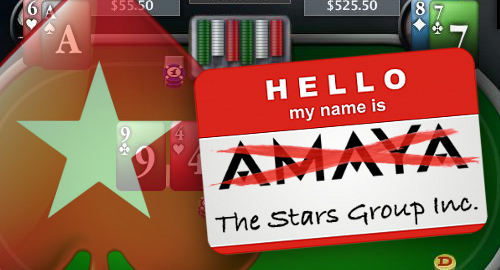 Canadian online gambling operator Amaya Gaming plans to rebrand and relocate to Toronto after posting better than expected results in the first quarter of 2017.

The parent company of PokerStars reported online poker revenue inching up 1.1% to $218.7m, the first such rise in three quarters. However, the poker numbers were flat in constant currency terms.

The company’s efforts to pivot away from its pure poker roots continue to pay off, as poker’s share of the overall revenue pie fell to 69% in Q1, down from 75% in the same period last year. Combined casino/sports revenue shot up 47% to $88.3m.

OTHER VERTICALS’ GROWTH PLANS
Amaya paid an additional $75m in deferred payments to PokerStars former owners last month, and the company expects to pay the remaining $47.5m by the end of June. On Friday’s earnings call, Amaya CEO Rafi Ashkenazi said the removal of this burden would free up cash to finally engage in some serious external marketing of its casino and sportsbook products ahead of the start of a new football season this August.

Ashkenazi said Amaya was currently spending around 13% of revenue on marketing, well below the +20% level spent by Amaya’s rivals. Two-thirds of the new marketing push will focus on the sportsbook and the rest on casino, as the latter still needs to develop a strong affiliate network.

NEW/OLD MARKETS
Amaya’s previous forecasts had suggested the company’s casino would be available to around 50% of its poker customers by this time, but the percentage now stands at 74%. Ashkenazi said Amaya decided to introduce casino into more grey/black markets based on legal advice and the actions of some of its bolder rivals (we’re looking at you, GVC Holdings).

Case in point: Russia, where PokerStars will host a live event at a Sochi casino later this month. Ashkenazi said Amaya had recently resumed television marketing in Russia after a two-year break, despite his uncertainty that the country would approve online poker or casino gambling this year. (For the record, no one expects Russia to take this step anytime soon.)

Ashkenazi said Amaya hoped to commence poker operations in India by Q3, or by Q4 at the latest. While Ashkenazi views the market quite positively, he doesn’t expect it will result in any significant revenue this year.

Amaya expects Australia to formally approve its ban on online poker and casino products this month, and Ashkenazi said the company would exit the country within 30 days of parliament approving the measure.

AMAYA NAME, MAILING ADDRESS LIVING ON BORROWED TIME
Amaya is proposing to change its corporate name to The Stars Group Inc., as a way of more accurately reflecting its bread-and-butter PokerStars operations and – presumably – putting further distance between itself and former CEO David Baazov, whose insider trading charges and other potentially criminal shenanigans have caused the company no shortage of image problems over the past year.

Amaya also proposes moving its corporate HQ from Montreal to Toronto to “more effectively manage its business and affairs” and to be closer to its new chief financial officer, who has yet to be named but apparently works out of T.O.

Shifting locales based on a single executive hire is either a sign of how much Amaya values its new CFO or an eagerness to distance itself from Quebec’s pesky securities regulators, who have made Amaya’s life miserable in the wake of Baazov’s insider trading scandals.

Shareholders will be asked to approve both the move and the corporate rebrand at Amaya’s 2017 annual general meeting this summer.

M&A FOCUS ON CUSTOMER ACQUISITION
On Thursday, Amaya confirmed the appointment of former William Hill exec Robin Chhabra to the new position of Chief Corporate Development Officer. Chhabra, who will officially join Amaya in September, has been enlisted to assist Amaya with mergers & acquisitions activity.

Finally, Amaya offered a brief update on its legal woes in Kentucky, where PokerStars’ pre-Amaya operations resulted in the state hitting the firm with a $290m civil judgment. Amaya said it expects oral arguments to commence early next year with a final ruling possibly being issued by spring or summer.