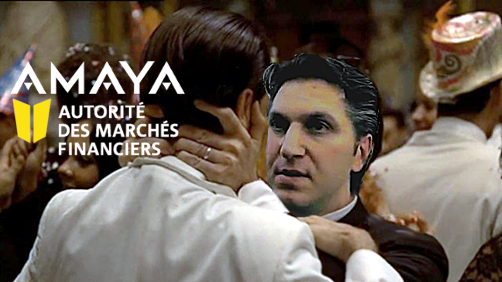 On Thursday, Joncas reported that AMF documents indicated Baazov had passed privileged information regarding Amaya business transactions to his older brother Josh Baazov aka Ofer Baazov (aka Fredo). In turn, Josh is said to have passed on info to their mutual friend Craig Levett, who in 2004 launched the business that eventually morphed into Amaya.

Josh and Levett were among the 13 individuals named in a separate AMF action on Wednesday. The 13 are suspected of collectively earning $1.5m by communicating privileged information related to Amaya’s business dealings.

FOLLOW THE MONEY
The illicit trading reportedly dates back to Amaya’s late-2010 discussions about acquiring online gambling technology firm Cryptologic. The AMF files reportedly show telephone calls between David and Josh, followed by calls from Josh to Levett, who went on to make multiple equity purchases in Cryptologic.

In the case of WMS Industries, which was acquired by Scientific Games Corp for $1.42b in 2013, Josh reportedly intercepted communications between David and an attorney discussing the imminent acquisition, which Josh subsequently relayed to Levett.

Hundreds of thousands of dollars worth of WMS shares were purchased by Levett, his wife Nathalie Bensmihan, his brother Earl and three other associates, netting the six individuals over $170k in profits. Levett subsequently cut Josh two checks totaling $32,100 that were marked ‘gift’ in the memo section.

The Levett family’s Amaya-related transactions reportedly earned them over $500k in illegal profits since 2010. The AMF says a further $800k in profit was generated via illegal trades related to Amaya’s 2014 $4.9b purchase of the Oldford Group, the parent company of PokerStars and Full Tilt.

The insider dealings were reportedly ongoing at the time the warrants were issued, as the AMF believes Josh, Levett and their accomplices were poised to benefit from insider knowledge of David’s recently announced plan to take Amaya private (a plan David insists is still in play, regardless of the charges). 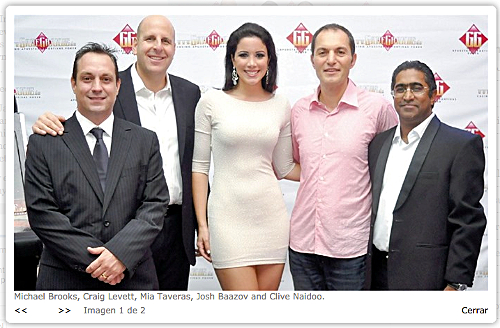 ARE YOU NOW OR HAVE YOU EVER BEEN AN AMAYA REP?
Josh Baazov’s exact relationship to Amaya remains a hotly debated topic. Josh and Levett were reportedly representing themselves as Amaya reps in meetings with Latin American government officials regarding gambling opportunities as recently as 2011 (Chile) and 2012 (Dominican Republic), the latter instance preserved for posterity in the listindiario.com image on the right.

Last year, an Amaya spokesperson told Canada’s Globe & Mail newspaper that Josh wasn’t acting as an Amaya representative in Chile but had proposed a transaction as “a third-party company” for a deal that would have utilized Amaya’s then land-based gambling machine technology.

Levett was originally listed as the sole shareholder in the numbered company that eventually became Amaya. By May 2007, Levett’s name had been expunged from the shareholder list and the Amaya spokesman insisted that neither Josh nor Levett were involved in getting Amaya off the ground.

Josh and Levett have a long business history, having been partners in notorious slow/no-pay online sports betting site BetonUSA before reportedly selling their interest in the US-facing site in 2006 following the passage of the UIGEA. The pair were rumored to have been involved in the subsequent launch of US-facing online sportsbook OddsMaker, although Levett has denied any ownership stake in the site.

Josh’s name recently surfaced as the owner (listed as Ofer Baazov) of the trademark of Fanpicks, a daily fantasy sports site.

DAVID BAAZOV’S MURKY FUTURE
The Baazov family’s legal woes have prompted no shortage of speculation regarding how far the legal ripples will spread. It appears almost certain that David’s bid to take Amaya private is all but doomed – assuming the bid was ever intended to do anything more than boost Amaya’s sagging share price – as David’s mystery investment partners aren’t likely to welcome this new uncertainty.

There’s also mounting speculation that David may be urged to step down from his executive role for the good of the company. Shareholders might have pressed for this step regardless of the recent developments, because, while David’s dealmaking talents are undeniable, his ability to run a successful online gambling company is far less definitive.

Amaya’s most recent earnings report showed a decline in its core poker product, driven in part by cannibalization from the site’s diversification into other gaming verticals. PokerStars’ ongoing cost-cutting measures at players’ expense have also been criticized as something that would have been unimaginable under Stars’ former management.

There’s also the question of gaming operator ‘suitability’ as a condition for licensing in most jurisdictions. If David is convicted, PokerStars could have a tough time hanging on to licenses in some jurisdictions, while the pursuit of new licenses in other jurisdictions will prove even more challenging. Even if David beats the AMF’s rap, the lingering whiff of illegality will provide PR ammunition for Stars’ anti-gambling and anti-competitive opponents.

The first jurisdictional casualty could be close to home. The province of Quebec’s plan to offer licenses to certain international online operators was widely perceived as a sop to local boys Amaya, but that favoritism looks a lot less publicly palatable when your argument becomes: “sure, he’s a rogue, but he’s our rogue.”

Local authorities could also find new reasons to question precisely why Amaya is allowed to take online wagers from Canadians while maintaining its head office in Montreal, as most Canadian-facing operators respect the widely held opinion that Canadian law only frowns on operators with a physical presence within Canada.