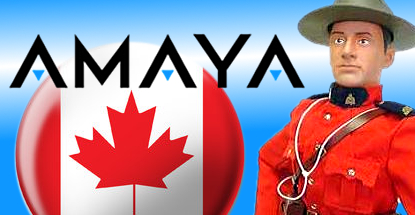 UPDATED TO INCLUDE AMAYA STATEMENT

The precise reason for the raid has yet to be revealed but AMF spokesman Sylvain Théberge told Forbes’ Nathan Vardi the operation was “part of an AMF investigation on [Amaya]. I can’t go further for the moment.” Eric Hollreiser, spokesman for the Amaya-owned PokerStars, said Amaya was cooperating with the investigation but said it was “not appropriate for us to provide further details at this time.”

Amaya made itself a global name this summer via the $4.9b acquisition of the Rational Group and its PokerStars and Full Tilt online gambling operations. Amaya’s stock experienced an unprecedented surge in trading well in advance of the acquisition, which may have attracted the interest of securities regulators on the hunt for evidence of insider trading.

Late Thursday, Amaya issued an official statement confirming that the investigation involved trading activity surrounding the Stars acquisition but “to the corporation’s knowledge, this does not involve any allegations of wrongdoing by the Corporation.” Amaya will continue to monitor the investigation but it “has had no impact on Amaya’s business operations, employees or companies.”

While the involvement of an investment bank strongly suggests otherwise, the possibility remains that the RCMP is responding to the questionable legality of PokerStars’ Canadian operations. Canada’s provincial gambling monopolies have long insisted that they are the only legal entities allowed to offer online gambling to Canadians, although Loto-Quebec has been pushing hard to amend the Criminal Code to permit licensing of private operators like Stars.

Following the acquisition, PokerStars withdrew from a host of grey- and black-markets while retaining its Canadian-facing operations. The RCMP has up till now not paid online gambling the same attention as federal agencies south of the border. But with the biggest online poker operator in the world now maintaining its mind and management within Canada’s borders, could the temptation to take a peek under the hood have proven too great?