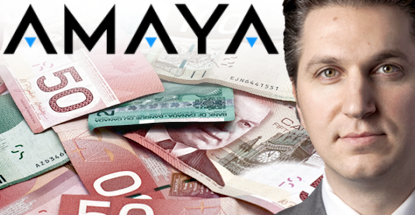 Amaya didn’t offer specifics on how each of its new toys had individually performed but CEO David Baazov said he “could not be happier with the initial performance” of the new business and the PokerStars team. Baazov said the company expects an even stronger Q4, with full-year revenue expected to come in at the top end of the previously stated $669m to $715m range.

Baazov was his usual closely guarded self on the call with analysts, declining to comment on recent rumors that Amaya was in the hunt to acquire some or all of the operations of struggling UK-listed operator Bwin.party. Baazov similarly declined comment on the status of PokerStars’ long-delayed online gambling license application in New Jersey.

Amaya also announced the sale of its now superfluous Ongame B2B poker network to NYX Gaming Group. The deal, which is expected to wrap by the end of the month, will see NYX pay up to 8x Ongame’s 2015 earnings, minus required working capital. In addition, Amaya has agreed to make a $10m “strategic investment” in NYX. The companies have also agreed to expand their existing pact that sees NYX subsidiary NextGen Gaming supply slots content to Amaya.

The two companies have a third-party link in New Jersey, as NYX inked an online casino platform deal with Atlantic City’s Resorts Casino Hotel in June. PokerStars has a similar online poker deal with Resorts that is awaiting the Division of Gaming Enforcement’s approval of Amaya’s license application.