Home / Business / PokerStars return to US shores expected within “weeks, not months’ 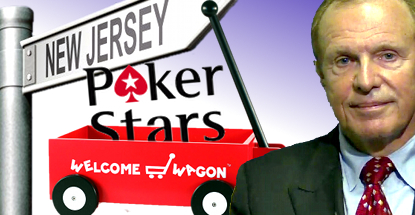 PokerStars could be cleared to launch in New Jersey’s regulated online gambling market within weeks, according to one of the state’s top elected officials. Taking a break from his tireless efforts to bring legal sports betting to the Garden State, state Sen. Ray Lesniak (pictured) tweeted on Thursday that he expects the online poker colossus will officially announce its return to US shores within “weeks, not months.”

Lesniak went on to tweet that the launch of the Stars brand in New Jersey would “spark an [Atlantic City] revival.” Echoing sentiments he’s been expressing for years, Lesniak said he would welcome “the millions [Stars] will invest in AC and jobs they will create. AC needs both.” Lesniak subsequently told PokerNews that Stars would make “a huge investment in Atlantic City, not just in internet gaming but in their brand and in bringing attractions to Atlantic City.”

Stars officially exited the US market following the April 15, 2011 Black Friday indictments that targeted the world’s three biggest online poker companies. Since then, Stars has paid $731m to settle the civil lawsuits filed against it on Black Friday, while the criminal charges leveled against Stars’ top execs were rendered moot after the company was acquired by Canada’s Amaya Gaming earlier this year.

In July 2013, Stars inked a prospective New Jersey tie-up with Resorts Casino Hotel, vowing to spend $10m to construct a new branded poker room at the Atlantic City casino. Since then, the seaside gaming hub has undergone a serious contraction, with as many as five of AC’s dozen casinos closing their doors forever before the year is through. Stars’ investment in remodeling Resorts would indeed make a welcome change from AC’s current doom-and-gloom narrative.

Further evidence of Stars’ New Jersey ambitions came after word surfaced that the company recently submitted applications for six new US trademarks, including its ‘We Are Poker’ tagline and its fast-fold product Zoom Poker. It’s been nearly seven years since Stars sought to register any US trademarks, suggesting Stars expects to resume transacting in greenbacks in the near future.