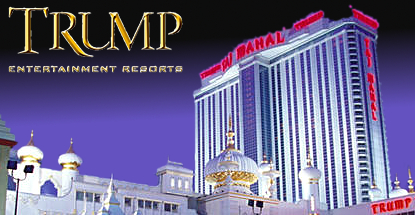 As expected, the Trump Taj Mahal casino in Atlantic City has issued WARN notices to its estimated 3,100 employees that the gaming joint could shut down by mid-November. The Trump Entertainment Resorts property filed for bankruptcy protection on Tuesday, citing hundreds of millions of dollars in liabilities and virtually nothing in liquid assets. On Wednesday, a Delaware bankruptcy judge granted the company a temporary lifeline in which to work out a plan to pull its ass out of the fire.

The WARN notices alert employees that their employer plans to shut down in 60 days, putting the Taj Mahal’s expected closing date no earlier than Nov. 13. Trump Plaza, the company’s other Atlantic City casino property, will close its doors forever on Tuesday (16). Trump Entertainment says its plan to rescue the Taj won’t work unless Local 54 of the Unite HERE labor union agrees to eliminate health insurance and pension plans, concessions the union has previously rejected. The Taj would be the fifth AC casino to close this year, reducing the seaside gaming hub’s casino roster to seven after starting the year with 12.

On Thursday, New Jersey Gov. Chris Christie conditionally vetoed an economic development bill passed by the state legislature because he wants the bill to contain more tax incentives to help AC in its darkest hour. Unlike previous incentives, this time Christie is looking to give AC’s non-gaming businesses a leg up. To be eligible for Christie’s proposed credits, businesses must be profitable and meet certain employment benchmarks. State Sen. Ray Lesniak, a longtime champion of the state’s gaming industry, said he was in favor of Christie’s initiative because AC “needs all the help they can get.”

Lesniak plans to issue his new sports betting bill on Monday in a bid to shore up the chances of the state’s latest gambit passing muster with US District Court Judge Michael Shipp. But while Lesniak believes sports betting will offer the state’s casinos and racetracks a sorely needed fresh revenue stream, others aren’t as positive. On Friday, Moody’s analyst Vito Galluccio issued a report saying that while sports betting would be “credit positive” for AC, it would only have “a modest effect” on casino revenue. Galluccio points to Nevada, where sports betting accounts for just 2% of overall casino revenue. Hey, AC will take it…