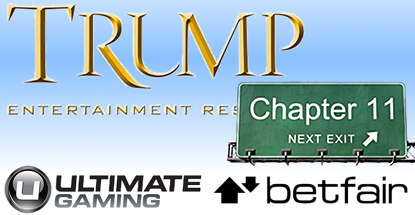 As expected/feared, the company behind two Trump-branded Atlantic City casinos has filed for Chapter 11 bankruptcy, putting further downward pressure on the troubled seaside gambling hub. On Tuesday, Trump Entertainment Resorts (TER) filed for bankruptcy protection for the fourth time in its history after failing to convince its workers to scrub their pension and health plans. The filing makes it almost certain that Atlantic City will soon be down to seven casinos (after starting the year with 12).

In a court filing in Delaware, TER CEO Robert Griffin said the company didn’t have enough cash on hand to make a $9.5m interest payment due Sept. 30. The company missed a $10.8m tax payment last month. The company has available assets of no more than $50k while liabilities range closer to $500m, most of which is held by billionaire investor Carl Icahn, who also controls Tropicana Entertainment, which operates one of AC’s remaining casinos.

The Trump Plaza is scheduled to close its doors forever on Sept. 16 and the Trump Taj Mahal could close as early as Nov. 13. Barring a miracle intervention, 60-day WARN notices will likely be issued to the Taj Mahal’s employees later this week. TER says its total staff complement is around 2,800, enough to push AC’s total casino job losses close to 10k for the year.

The New York Post reported that impresario/coonskin-cap-fan Donald Trump – who holds a 9% stake in TER but who hasn’t had an active role in the company for years – may be interested in reacquiring control of the struggling company. Trump’s most recent dealing with TER was a legal bid to strip his name from the brand based on his belief that present management had failed to maintain the classy reputation for which Trump is renowned. (Insert your own punchline.)

The filing comes one day after New Jersey Gov. Chris Christie held an emergency summit with gaming industry stakeholders in Atlantic City. None of the participants have been forthcoming about any specific agreements reached on Monday, except to say that the operators, politicians and labor leaders who attended have been given a series of “short-term fixes and long-term action items” on which Christie wants to see progress over the coming 30 days. The group will reconvene in mid-October to gauge their progress and brainstorm some more.

WHITHER BETFAIR AND ULTIMATE GAMING?
Also likely brainstorming like hell are Betfair and Ultimate Gaming, the two gambling operators who paired with the Trump casinos in New Jersey’s regulated online gambling market. While the Division of Gaming Enforcement (DGE) has given Betfair leave to continue life following the Plaza shutdown, the reprieve wasn’t indefinite, meaning both Betfair and Ultimate Gaming need to find another land-based casino partner ASAP.

Problem is, AC’s remaining casinos all have their own online partners and while the DGE allows each casino to operate up to five different online platforms, there would appear to be little incentive for any of these casinos to further split the market’s online revenue (which has to date fallen well short of expectations). While the market rebounded slightly in July after three months of declining revenue, New Jersey operators are also bracing for the imminent arrival of revenue glutton PokerStars, which has partnered with Resorts Atlantic City.

Betfair and Ultimate Gaming ranked fifth and sixth (out of six) in New Jersey’s most recent online market revenue chart but their slices weren’t so small that other operators would turn up their noses at a chance to absorb the extra cash-flow. Caesars Entertainment decided to close one of its four AC casino properties despite the fact that it was a profitable operation, suggesting that it had acted simply to create one less mouth to feed. It’s entirely conceivable that Caesars and the other AC operators would opt to let Betfair and Ultimate Gaming’s homeless sites die from neglect if it meant a little more food on the table.