Donald Trump sues to get name removed from AC casinos

Real estate mogul Donald Trump has sued Trump Entertainment Resorts to remove his surname from the Trump Plaza and the Trump Taj Mahal, five years after his AC exodus. 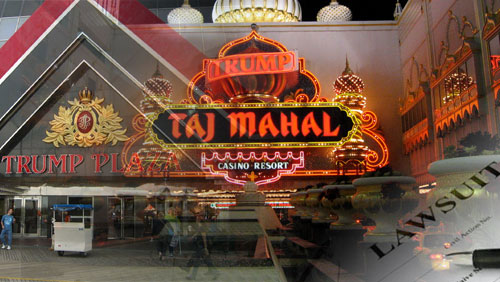 Trump claims to be frustrated with Trump Entertainment Resorts, a company he does not own anymore, over the business entity’s alleged failure to keep the two casinos in good standing since Trump left the casino scene in Atlantic City. Donald still has a 10 percent stake in the company which allowed them to use his name for licensing purposes.

Trump’s suit in state Superior Court in Atlantic County demands his name be taken off the two casinos because Trump Entertainment Resorts has allowed the casino properties to fall into an utter state of disrepair and have otherwise failed to operate and manage the casino properties in accordance with the high standards of quality and luxury required under the license agreement.

“I want [the Trump name] off both of them,” Trump said in an interview with Associated Press. “I’ve been away from Atlantic City for many years. People think we operate (the company), and we don’t. It’s not us. It’s not me.”

The lawsuit highlights the impending closure of Trump Plaza on September 16, accusing management of egregiously failing to keep the establishments in good standing, causing the resort to fail two quality reviews tests in the past two years. “Not only does the issuance of these WARN notices further harm the Trump name and brand but it also underscores the company’s inability to remedy the appalling conditions that gave rise to the defaults under the licensing agreement in the first place,” Trump’s lawsuit added.