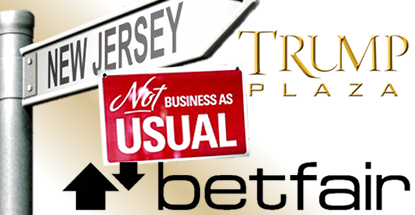 Atlantic City may soon be down to just seven casinos as the Trump Taj Mahal prepares to send its workers official layoff notices. Earlier this week, word leaked that the Trump Entertainment Resorts property was teetering on the brink of filing for Chapter 11 bankruptcy protection. On Thursday, NBC10.com reported that casino workers union UNITE HERE Local 54 had been given the heads-up that WARN notices – which alert staff that a business plans to close within 60 days – were due to be issued to the Taj Mahal’s 2,825 employees. The Trump Plaza is due to close Sept. 16, the fourth (so far) AC gaming joint to shut its doors in 2014.

The Trump properties’ woes mark the first shutdown of a casino that has partnered with a firm licensed by the state to conduct online gambling operations. The Plaza has partnered with UK-listed exchange betting operator Betfair while the Taj Mahal has a deal with Station Casinos’ online arm Ultimate Gaming. The unprecedented scenario facing the Division of Gaming Enforcement (DGE) has created uncertainty as to the fate of these online operations.

On Friday, the DGE published a response to a Betfair request to be a full participant in any discussions regarding the future of its online operations in the state. Betfair noted that it “invested substantial resources” into its New Jersey operations but the August. 25 request said the Plaza had “failed to even respond” to Betfair’s request for “a face-to-face meeting with senior management in order to discuss the implications” of the Plaza’s impending closure.

In its response, the DGE acknowledged that Betfair had an interest in the shutdown proceedings “sufficient to merit participation” but the DGE would limit said participation to “the submission of a brief or other written filing.” Ominously, the DGE’s response notes that Betfair “has demanded from Trump Plaza the release of certain funds which are allegedly due to the petitioner,” but the DGE said it was “not the proper forum to consider such contract disputes, which are within the purview of the court system.”

The DGE has subsequently authorized the Plaza to continue its online gambling operations post-shutdown until the DGE “directs the surrender” of the Plaza’s online permit. Online operations can continue provided the casino and Betfair supply the DGE with (a) weekly revenue updates, (b) daily confirmation that its designated online bank account contains enough money to cover the total amount of online customer deposits and (c) a list of safeguards and procedures the firms are employing to ensure the security and integrity of player data.

On Friday, DGE director David Rebuck told the Associated Press that the intention was to give Betfair time to partner with another Atlantic City casino. Rebuck said Betfair “want to remain fully functional and stay in New Jersey and we will work with them to do that.”