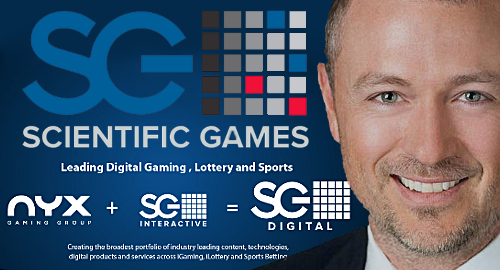 On Tuesday, SGMS announced the launch of SG Digital, which will combine the company’s existing portfolio of SG Interactive B2B products and services with the online casino and sports betting assets of NYX Gaming Group, which SGMS acquired in January.

SG Digital’s offering will include NYX’s Remote Game Server, Open Gaming System and Open Platform System, plus the OpenBet sports betting platform – which SGMS hopes will give it first-mover advantage should the US Supreme Court strike down the federal sports betting prohibition – as well as the SG Universe’s Play4Fun Network social casino and Mobile Concierge technology.

SG Digital’s estimated 1,500-strong workforce will be headed by NYX CEO Matt Davey (pictured), while Jason Walbridge will serve as SG Digital’s chief operating officer. Davey called it a “privilege to be tasked with leading and shaping” the new division, which he said would provide “unrivalled, seamless solutions” to the industry.

SGMS CEO Kevin Sheehan didn’t shy away from stating the company’s goal of becoming “the world’s leading supplier of digital gaming, sports and iLottery solutions.” Sheehan said SGMS was now “perfectly positioned to capitalise on any future regulatory developments in both U.S. and global markets.”