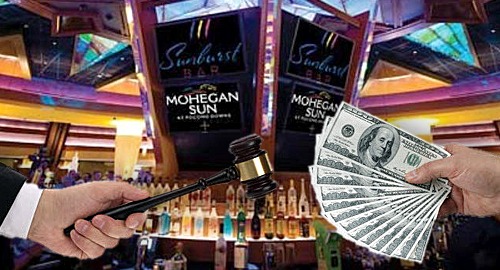 Pennsylvania gaming regulators levied over $1.1m in fines against five casino operators, with the bulk of those fines going against the operators of Mohegan Sun Pocono.

On Wednesday, the Pennsylvania Gaming Control Board (PGCB) announced that it had imposed a $1m penalty on Downs Racing, a subsidiary of Mohegan Gaming & Entertainment, which operates the Mohegan Sun Pocono casino in Wilkes-Barre.

The bulk ($550k) of this fine stems from the casino’s “failure over a multi-year period to follow approved internal controls regarding free slot play, the main bank and internal audits,” while the rest ($450k) was for “conducting business with unlicensed gaming service providers.”

The casino was embarrassed last year by the arrest of its Robert Joseph Pellegrini, the casino’s former VP of player development, for his involvement in a free-play slots scam that took the casino for over $422k and ultimately netted Pellegrini a 32-month jail sentence.

The dealings with unlicensed service providers made news earlier this year, due to its connections to then-Mohegan Tribal Gaming Authority CEO Bobby Soper, who resigned shortly thereafter, all the while insisting that his exit was unrelated to the PGCB probe.

The remaining $167k in fines were assessed against the operators of the Parx Casino, Valley Forge Casino Resort and Mounty Airy Casino Resort, for various violations including underage gaming, allowing staff to work without licensing, serving alcohol to already drunk patrons while gambling and a cage cashier accidentally overpaying a customer $9k. (How much had SHE been drinking?)

SATELLITE CASINO LICENSE AUCTION SET, BUT IS ANYONE BUYING?
The PGCB also announced the schedule for its “initial round” of auctions for the 10 new Category 4 “satellite casino” licenses allowed under the state’s new gambling legislation. Minimum bids for these licenses, which cannot be built within 25 miles of any of the state’s existing 13 casinos, are set at $7.5m, and existing casino operators will have first crack at these licenses.

Each of these venues will be allowed to operate a minimum of 300 and a maximum of 750 slot machines. The satellites can also offer up to 30 gaming tables, but this requires a separate certificate and a fee of $2.5m. After one year, licensees can apply to add an additional 10 tables.

The first auction will take place in Harrisburg on January 10, with subsequent auctions coming roughly every two weeks until May 16, by which time (theoretically) there will be no more licenses left to issue. If interest is slack, a “subsequent round” of auctions will be held, with the last of these to come by the end of August.

Under the new legislation, local municipalities are allowed to ‘opt out’ of allowing any new gaming venues on their turf, and so far over 400 municipalities have told the PGCB ‘no dice.’ Municipalities must declare their non-interest by December 31.