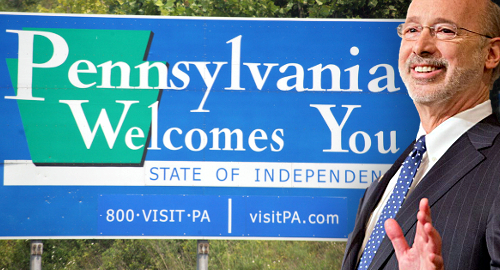 Pennsylvania’s governor has officially approved his state becoming the fourth in the land to permit legal online gambling.

State regulators can now begin the process of crafting regulations and processing online gambling applications. There are 12 licenses available for each online vertical – slots, casino table games and poker – with the state’s 12 brick-and-mortar casino operators given first dibs.

Once the application window opens, the casinos will have 120 days to submit their bids. Assuming any licenses remain unclaimed at the end of this period, other qualified entities will be permitted to apply. And given the state’s plan to impose a punitive 54% tax on online slots – mirroring the state’s nation-high land-based slots tax – there may actually be some licenses left over.

Wolf had 10 days in which to either sign or veto the bill, or simply do nothing and let it become law by default. There doesn’t appear to have been a serious threat of Wolf blocking the bill’s passage, given the urgency of resolving the state’s prolonged failure to approve a fiscal budget.

However, Wolf threw a bit of a wobbler on Friday when his office announced a surprise move to permit the Pennsylvania Lottery to offer virtual sports games at Lottery retailers, including bars and taverns. These venues will receive 5% from virtual sports sales on their premises, similar to what they receive from the sale of other Lottery products.

Wolf claimed virtual sports could boost the funding the Lottery provides to senior citizens’ programs by $75m over the next five years. The Lottery stunned observers earlier this month by posting a deficit of $18.2m in its 2016-17 fiscal year, the first annual loss in the Lottery’s 40-year history, leading Wolf to observe that “intense competition is straining Lottery profits.”

The virtual sports plan appears to be a bone thrown to House legislators who’d advocated for a much larger VGT plan than was written into the final legislation. The House had pushed for the rollout of up to 40k VGTs in bars and taverns, while the Senate wanted no VGT expansion, ultimately settling on the truck stop plan, which could limit the statewide rollout to between 1,500 and 2k machines.