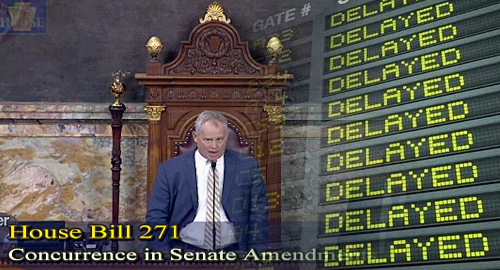 Pennsylvania legislators came within a whisker of approving online gambling in their state, but last minute revisions to the bill left House representatives and industry stakeholders howling in protest.

Late Wednesday, it appeared that Pennsylvania’s two legislative chambers had finally reached agreement on a budget revenue plan, months after they approved the spending portion of the budget.

The House approved the original HB-271 legislation back in June, and the Senate approved a revised version of the bill on Wednesday afternoon. But multiple House reps complained that they’d had no time to read let alone digest the 279-page amendment the Senate tacked onto HB-271. (The full text can be read here, with the current version starting around page 470.)

A motion to defer a vote on the bill until Thursday morning was rejected by the slimmest of margins, falling just one vote short of passing. But the naysayers weren’t giving up, and they kept presenting further delay motions until time expired on the day’s session.

House legislators now plan to reconvene Thursday morning at 8am for (presumably) some brief debate followed by a vote. At least we hope.

A TAXING PROBLEM
As amended, HB-271 allows for three types of online licenses: slots, poker and casino table games. The latter two products will be taxed at 16% of gross revenue (a base rate of 14% + 2% local share assessment), while online slots will be taxed at the same rate as land-based slots revenue: the industry high 54%.

The original version of HB 271 envisioned an across the board 19% tax rate on all online gambling products but the 54% rate was actively promoted by several state senators, including two who represent the districts containing the Parx and Sands Bethlehem casinos, whose CEOs have each expressed opposition to online gambling.

Nobody in a position of power appears to realize that this 54% is at least twice the rate at which online gambling operators have said their businesses could reasonably expect to turn a profit. But hey, as Barbie once observed, math is hard.

WHO GETS TO PLAY
Pennsylvania’s current brick-and-mortar casino operators will have first shot at online gambling licenses, with an exclusivity window of 120 days. If these operators apply for licenses within the first 90 days, a license covering all available online products (slots, table games, poker) will cost them $10m. After 90 days but before 120 days, the fee drops to $4m per product.

After that 120-day window expires, “qualified gaming entities” that are “licensed in any jurisdiction” that Pennsylvania regulators deem worthy can apply for an online license at $4m per license. All online licensees will pay $250k to renew their licenses.

The online licensees’ technology providers, aka “interactive gaming operators,” will pay a one-time authorization fee of $1m, with renewals costing $100k. There are no specific ‘bad actor’ provisions, only the standard caveats re a licensee’s ‘suitability.’

The bill allows Pennsylvania to enter into “interactive gaming reciprocal agreements” with other states or jurisdictions in which online gambling is legal to facilitate cross-border play. The bill also allows for multistate agreements covering wide-area progressive slots play.

Assuming Gov. Tom Wolf is eventually presented a bill to sign, Pennsylvania will become only the fourth US state – joining Delaware, Nevada and New Jersey – to authorize online gambling within its borders.

SPORTS BETTING READY
The amended bill would also allow for legal sports betting if/when the necessary federal law is enacted or a federal court decision clears the way. The bill clearly views at least one of these scenarios as likely in the near term, as there are around 20 pages of detailed rules regarding how Pennsylvania’s gambling licensees can conduct their sports betting operations.

For one thing, the state would permit land-based, online and mobile betting, as well as exchange wagering. Operators would pay one-time fees of $10m while paying 34% tax on betting revenue, plus a further 2% in local share assessment. Anyone caught making book without a permit would face fines of $150k for first offenses capping out at $1.2m for repeat offenders.

DAILY FANTASY SPORTS
The bill’s DFS provisions include license fees of $50k for an initial five-year term, with renewals costing $10k, while DFS ‘adjusted’ revenue would be taxed at a rate of 15%. The bill contains the now-standard consumer protections, such as banning the use of scripts, ensuring ring-fenced contests for DFS novices, etc.

Casino licensees that choose to offer DFS can offer ‘restricted contests’ that include prizes of slot machine promotional play or table game match play to over-21s. The bill also allows casinos to introduce fantasy contest terminals into their facilities provided they’re not put on the casino floor.

SATELLITE CASINOS
The bill authorizes ten new Category 4 aka ‘satellite’ casinos that can’t be located with 25 miles of an existing brick-and-mortar casino. These licenses are to be auctioned off, with the process starting January 15 and concluding July 31. The minimum bid is set at $7.5m.

Each venue would be allowed no fewer than 300 but not more than 750 slots, with each machine carrying an authorization fee of $10k. Adding table games will require an additional $2.5m fee.

The satellite casino plan was never a favorite of some of the state’s casino operators, with Penn National Gaming going as far as to hand lawmakers a position paper claiming these venues would cannibalize existing gaming revenue rather than create new revenue, with a “disproportionately negative impact” on Penn’s Hollywood Casino property.

FILL ‘ER UP WITH VGTs
The controversial issue of video gaming terminals (VGT) was considered to be the primary sticking point between the House and Senate, with the House supporting a massive rollout of tens of thousands of VGTs scattered piecemeal across the state’s bars and clubs, while the Senate wanted zero VGTs.

In the end, the Senate proposed allowing a select number of truck stops to add five VGT apiece. These truck stops must occupy at least three acres of real estate, have at least 20 parking spots reserved for commercial rigs, and have sold 50k gallons of diesel fuel per month in the past year. VGT operators would pay the same 54% casino slots rate.