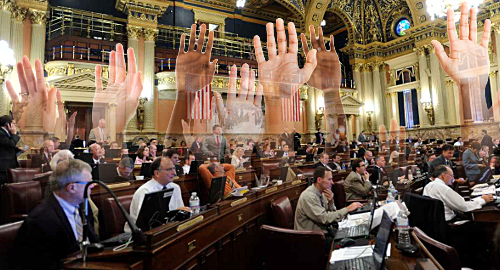 Pennsylvania’s House of Representatives approved a partial budget revenue plan Tuesday night, and while gambling revenue will reportedly form part of the overall revenue plan, it remains to be seen if online gambling is included.

In June, state legislators agreed on a $32b spending plan for the 2017-18 fiscal year, but they’ve yet to work out the precise details on how they’ll pay for that spending. Roughly $200m of this revenue has been earmarked as coming from gambling expansion, but the House bill that legislators approved Tuesday night offered no further specifics on what a gambling expansion might include.

Last month, state legislators allegedly reached a tentative agreement on a gambling expansion plan that would include online casino and poker sites, as well as daily fantasy sports operations.

Other components reportedly included allowing the state’s current casino operators to build up to 10 ‘satellite’ casinos and authorizing up to 1,500 video gaming terminals (VGT) scattered across the state’s truck stops.

The House’s original VGT proposal involved up to 40k of the machines in bars, clubs, VFW halls and other small venues. But the state’s casino operators lobbied hard to kill this plan in the womb and the Senate duly drew its line in the sand.

It’s unclear whether the VGT issue has been truly settled, and in fact, it appears that all the pieces of this gaming jigsaw puzzle remain in play. There’s also the possibility that gaming is ultimately jettisoned from the final plan in favor of other, less contentious revenue generators. All eyes now turn to the Senate and Gov. Tom Wolf, who has so far said only that he will examine the House plan.

PENNSYLVANIA LOTTERY POSTS FIRST EVER ANNUAL LOSS
While the news may not mean much, the state’s online gambling supporters likely weren’t cheered by Tuesday’s report that the Pennsylvania Lottery ended its 2016-17 fiscal year with an $18.2m deficit, marking the first time in the Lottery’s 40-year history that it’s posted an annual loss.

Total lottery sales were down $134.1m from the previous year, which benefited from the excitement over record Powerball jackpots. Regardless, the shortfall means the Lottery’s contributions toward the state’s senior programs came in $75m below the previous year.

The deficit will likely be used by all the parties packing the state’s gambling revenue sausage, with claims that the expansion of this or the addition of that will mean even lower Lottery sales, and counterclaims that only new forms of gambling can replace declining lottery revenue, while lottery proponents will renew their efforts to allow online lottery sales. Ain’t democracy grand?