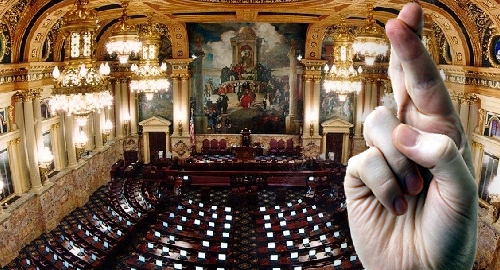 Pennsylvania’s online gambling hopes got a major boost on Thursday via reports that the state’s bickering legislators had reached tentative agreement on a gaming expansion plan.

Late Thursday, City & State Pennsylvania quoted sources saying state legislators had agreed that online poker and casino sites would form part of the $225m in extra gaming revenue the legislature had already agreed would contribute to the $32b budget for the state’s current fiscal year.

The Senate is now reportedly looking to get $250m from gambling into the budget, and the extra $25m could come from increased taxes on casino table games. At present, casinos pay 16% tax on their table revenue, but scuttlebutt has it that this could be raised to 20%.

It’s unknown whether legislators have tweaked the fee and tax structure of their earlier online gambling plans. Earlier this week, GamblingCompliance scribe Chris Krafcik tweeted that his sources indicated online gambling operators would pay one-off license fees of $10m-$15m, while online revenue would face an effective tax rate of 15%-20%.

In addition to potentially becoming only the fourth US state to permit online gambling within its borders, legislators have reportedly agreed to permit the state’s 12 licensed casino operators to open 10 satellite casinos in rural areas far from the existing venues, as well as approving video gambling terminals (VGT) at truck stops.

The state’s House of Representatives had supported a plan to authorize up to 40k VGTs at bars, clubs and other small venues, but the Senate opposed this plan, in part because the state’s 12 casino operators lobbied furiously against this ubiquitous competition.

Last week, local media had reported that the VGT and satellite casino issues had “cancelled each other out.” The truck stop VGT plan reportedly involves far fewer machines – a maximum 10 per location, for a combined total of less than 1,500 – than the House envisioned, but this toe in the door may have been enough to placate House members.

Or maybe not. The Republican leadership in both chambers is said to be on board with the plan, but House Minority Leader Frank Dermody said the Democrats hadn’t agreed to anything and wouldn’t until they’d had more time to review the details of any agreement. The Senate has scheduled a budget vote for next week, meaning there’s could still be plenty of furious jockeying and lobbying over the weekend.