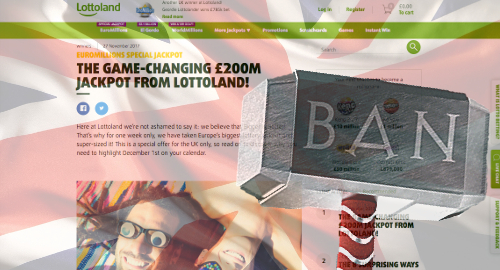 The UK government has made good on its threat to prohibit third-party betting on EuroMillions lottery draws, delivering another blow to online lottery betting operator Lottoland.

In March, the UK Department for Digital, Culture, Media and Sport (DDCMS) launched an open consultation on ‘Prohibiting Third Party Betting on Non-UK EuroMillions Draws.” The consultation followed public complaints from National Lottery operator Camelot, who moaned about Lottoland undercutting its EuroMillions revenue by not matching its higher ticket prices.

On Thursday, the DDCMS released the results of its consultation, while revealing the DDCMS’ intention “to introduce a new license condition to prohibit consumers in Great Britain from placing bets on EuroMillions games which take place outside the UK.”

The DDCMS noted that lottery betting was a relatively recent phenomenon, but felt the returns to good causes from traditional lottery operators could decrease should lottery betting become “widespread.” The DDCMS admitted this assumption was far from inevitable, given the lack of hard data on this subject, but nonetheless remained “concerned” at the possibility.

The DDCMS says it is “mindful of the effect on impacted businesses” like Lottoland, and thus it will “tailor the license condition to ensure it is in line with our aims to reduce consumer confusion.” In June, the UK Gambling Commission fined Lottoland £150k for not making it clear to customers that they were “betting on the outcome of a lottery draw and not actually taking part in a lottery.”

Lottoland CEO Nigel Birrell called the DDCMS decision “unjustified” and would set “a dangerous precedent for policy-making on the basis of no evidence.” Birrell, who has previously slammed UK lottery operators’ outdated business model, said the decision “will do nothing but stifle innovation in the sector.”

Birrell also warned that due to the “significant impact to our UK business of this decision, we are reviewing all available options before determining our next steps.”

Just this week, Lottoland had announced a new limited time UK-only ‘EuroMillions Special Jackpot’ that “super-sized” the lottery’s top prize to £200m. If a single punter were to claim that prize, it would top the UK’s record lottery win by nearly £40m.

Lottoland’s disruptive business model is under fire in other jurisdictions, including Australia, which recently announced it would prohibit third-party betting on domestic lotteries. Like the UK, Australia will continue to permit operators like Lottoland to offer bets on international lotteries that would be otherwise inaccessible to local punters.