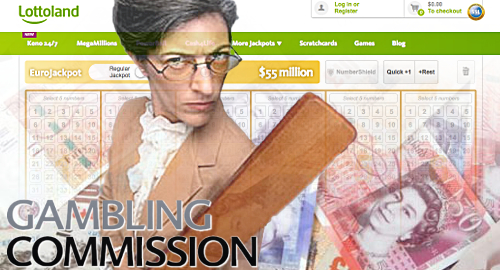 The UK’s gambling regulator has slapped a £150k fine on lottery betting operator Lottoland for misleading customers as to what they were betting on.

On Tuesday, the UK Gambling Commission (UKGC) announced it would require Lottoland to make a £150k contribution to socially responsible causes after determining that the operator “did not make it clear to consumers that they were betting on the outcome of a lottery draw and not actually taking part in a lottery.” Lottoland was dinged a further £9k to cover the costs of the UKGC probe.

In February, the UK Advertising Standards Authority (ASA) spanked Lottoland over a radio advert that the watchdog felt misled consumers as to whether they were in fact directly participating in a EuroMillions lottery draw rather than betting on a lottery outcome.

The UKGC says its own investigation found that Lottoland’s website, social media and third-party marketing promotions “failed to make it clear” that customers were in fact betting on the outcome of a lottery draw.

UKGC enforcement and intelligence director Richard Watson said Lottoland had “used ambiguous terminology in their marketing and advertising, which was misleading.” Watson said this ambiguity was “not acceptable and the £150k penalty package reflects the seriousness of Lottoland’s failures.” Watson urged other gambling operators to learn from Lottoland’s mistakes.

As stated above, Lottoland allows customers to bet on the outcome of lottery draws, including the EuroMillions partnership. This has earned the ire of National Lottery operator Camelot, who has complained about Lottoland offering punters a more cost-effective way to pursue a EuroMillions jackpot.

This March, the UK government announced it was reviewing whether to prohibit “third party betting on non-UK EuroMillions draws.” While lottery betting accounts for only a small slice of overall lottery spending, the government wondered if these options were “resulting in customer confusion” as to whether a portion of their spending was going to socially responsible causes.

The UKGC has been clamping down on its online gambling licensees’ marketing activities, recently announcing a tandem probe with the UK Competition and Markets Authority that found fault with five operators – including Ladbrokes and William Hill – for potentially violating consumer law via misleading sign-up offers.