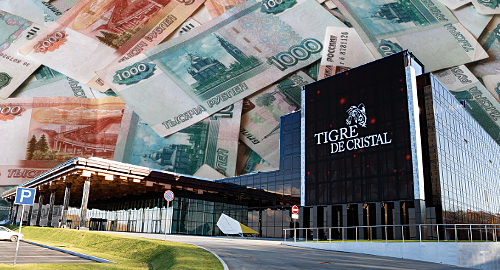 The operator of the Tigre de Cristal casino in Russia’s far east is warning investors of the potential fallout of that country’s plans to dramatically hike gambling taxes.

On Friday (10), Russia’s parliament will hold its second reading of draft law No. 1037957-6, which could lead to Russian-licensed gambling operators’ tax obligations doubling by January 1, 2018. The government has said it plans to gradually hike gambling taxes to 10x their current rates by 2020.

Russia’s land-based casino operators don’t pay taxes on their gaming revenue, instead paying fixed fees based on the number of gaming positions in their establishments. These fees vary according to the whims of local governments in which Russia’s few designated gaming zones are located.

At present, Russian-licensed casinos must pay monthly rates of between RUB 25k-125k per gaming table, and between RUB 1,500-7,500 for each slot machine. The draft law would see these ranges hiked to between RUB 50k-250k per table and between RUB 3k-15k per slot.

In the case of the Primorye gaming zone near Vladivostok, the one operational casino – Lawrence Ho’s Tigre de Cristal – currently pays annual fees of RUB 125k (US $2,100) for each of its 55 gaming tables, plus RUB 7,500 ($126) for each of its 286 electronic gaming machines.

On Tuesday, the Ho-controlled Summit Ascent Holdings Ltd, which holds a majority stake in Tigre de Cristal, informed the Hong Kong Stock Exchange of what Russia’s proposed changes could mean for the company’s tax obligations.

Summit Ascent says the Primorsky territory government is determined to make its gaming zone attractive enough to lure additional casino operators, and thus its current intention is to maintain the region’s tax rates at their present level, as they are already within the proposed ranges in the draft law. However, Summit Ascent cautions that there’s no guarantee that the local legislature would approve this stand-pat approach.

Should the Russian Duma approve the draft law and the Primorsky legislature opt to hike gambling taxes to their new maximum, Summit Ascent says the company would experience an annual negative impact of around RUB 108m ($1.85m), assuming its number of gaming positions remains unchanged.

NEW CHINA TOURISM RULES LOOM LARGE
Tigre de Cristal recently celebrated two years of operation, during which some 850k guests have crossed its threshold, 38% of whom were foreign tourists. The overwhelming majority of these tourists came from China, which makes the Chinese government’s recent announcement of a crackdown on overseas casino visitation all the more worrisome.

Last month, the China National Tourism Administration approved new rules for international package tour operators, with new prohibitions on tour guides making “arrangements for tourists to visit or participate in projects or activities that involve violations of laws, regulations and social morals in China, such as pornography, gambling and drugs.”

While the new rules, which take effect January 1, won’t cut into Tigre de Cristal’s China-derived VIP gambling activity, it could have a harsh effect on mass market gaming revenue. The Chinese government has yet to indicate how it intends to monitor tour operators’ compliance with the new rules.