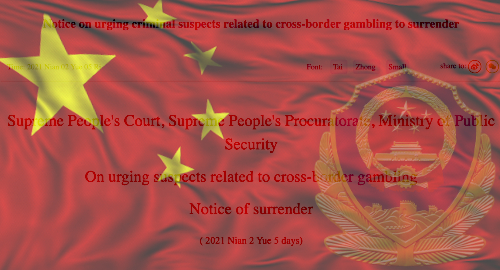 China is giving international gambling operators until April 30 to turn themselves in or be thrown to the (metaphorical, we presume) lions.

On Friday, China’s Ministry of Public Security (MPS), the Supreme People’s Court and the Supreme People’s Procuratorate issued a joint ‘notice of surrender’ to individuals engaged in ‘cross-border’ gambling (online or land-based), warning them that they had until the end of April to throw themselves at the mercy of Chinese courts.

The notice states that those who come forward now of their own accord will be given ‘the opportunity to rehabilitate and strive for leniency.’ Suitably contrite suspects may receive ‘a lighter or mitigated punishment according to law’ while those whose crimes are ‘relatively minor’ may get off with just a warning.

However, those who come forward will be obliged to ‘report or expose the criminal behavior of others’ and ‘actively assist’ in the capture of other suspects. Such ‘significant meritorious service’ will be factored into the courts’ determination of the appropriate punishment.

Citizens who aren’t guilty of any gambling offenses but know of individuals engaged in such activity have been invited to fink on their friends, with the understanding that the authorities will ‘protect the reporter’ from any retaliation by suspects unwilling to surrender themselves.

A subsequent media briefing by representatives of all three government agencies made it plain that they were interested in apprehending ‘backers and investors of the gaming groups outside China that solicit our people to gamble.’

China’s government recently amended the country’s Criminal Law to expressly criminalize the “setting up or managing casinos overseas, or others they appoint [who] organize and solicit citizens of [China] to go abroad and participate in gambling.” The new rules are set to take effect on March 1.

The new legal reality has sparked minor panic among China’s junket operators, which ferry high-rolling gamblers to casinos in Macau and other Asia-Pacific markets. The amended law’s unclear language has prompted much debate as to whether Macau is included in the definition of ‘abroad.’

As Sands China president Wilfred Wong noted on casino operator Las Vegas Sands’ recent earnings call, the amended rules “specifically say outside of the country, which, as you all appreciate, Hong Kong, Macau, and Taiwan is generally considered within the country. But then they leave ambiguity there by putting the word ‘offshore’ inside the bracket after outside the country.”

Last week, China expanded the blacklist of ‘cross-border gambling tourist destinations’ that was originally announced last August. However, the list of countries has never been published, apparently with the intention of keeping casinos, junkets and mainland gamblers fretting as to whether they face China’s increasingly long arm of the law.

China is estimated to have around 11m citizens gambling online on any given day, thanks to operators providing at least 14 types of online payment methods. These include complex ‘fourth party’ systems involving issuing bogus invoices that are paid with ‘borrowed’ bank/phone cards, while the Tether stablecoin is also proving increasingly popular with China-facing sites.