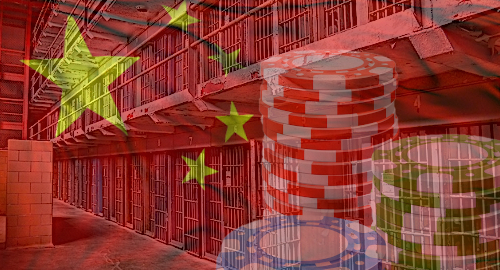 Casino junket operators who lure Chinese nationals to gamble abroad could face up to 10 years behind bars under the country’s revised Criminal Law.

This past weekend, the Standing Committee of China’s National People’s Congress approved a number of amendments to the country’s Criminal Law, including the new definition of ‘organizing and soliciting by casinos abroad’ that was proposed in October.

Article 303 of the Criminal Law now includes a clause regarding persons “setting up or managing casinos overseas, or others they appoint [who] organize and solicit citizens of the [People’s Republic of China] to go abroad and participate in gambling.”

If wagering by these individuals lured abroad “is huge or there are other serious circumstances,” those who lured or organized their activities will face a prison sentence of between 5-10 years, along with unspecified fines. The new law will officially take effect on March 1, 2021.

Following October’s initial reports of the proposed law change, junket operators fretted over whether or not Macau’s casinos would be considered ‘abroad.’ On Monday, GGRAsia quoted two legally astute individuals observing that junkets ferrying VIP gamblers to Macau likely have serious cause for concern, not just in terms of geography but also for the volumes of cash these high-rollers turn over in Macau.

MACAU FURTHER TIGHTENS ENTRY REQUIREMENTS
Junket operators were already struggling due to the pandemic reducing the desire of well-heeled mainland residents to travel anywhere to gamble, particularly if quarantine was required on one or both ends of the journey.

That already dodgy situation took a turn for the worse last week, when Macau’s government announced that it was extending its mandatory quarantine period from 14 days to 21 days. The new rules applied to anyone arriving from somewhere other than mainland China or Taiwan, although individuals from those two regions still had to follow the 14-day time-out.

Just two days later, Macau’s government announced that all residents of mainland China, Taiwan and Hong Kong who’d been in a foreign country in the previous 21 days would be prohibited from entering Macau altogether. The rules apply regardless of whether a would-be visitor has received a COVID-19 vaccination.

Macau will release its December gaming revenue report on Friday, which will allow a final 2020 tally on a year like no other. Expect a lot of casino execs, even those who didn’t spend Thursday night drowning their sorrows in 72-year-old Mcallan, to spend a significant part of New Year’s Day retching violently.