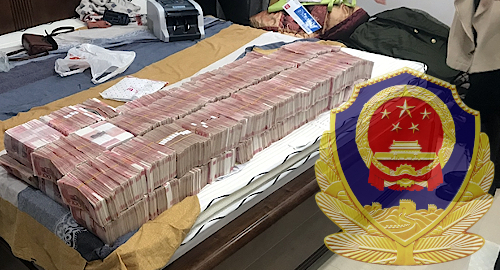 China continues to claim success in combatting gambling operations targeting its citizens at home and abroad, even as other operators rush to fill the void created by arrested rivals.

On Wednesday, China’s Ministry of Public Security announced the latest statistics in its war on so-called ‘cross-border gambling,’ the definition of which may or may not include Macau casinos, depending on whether or not it involves unauthorized capital outflow.

As of September 30, Chinese authorities claim to have handled over 8,800 cross-border gambling cases and made over 60k arrests – including some 590 Chinese nationals arrested by police in other countries – while shutting down over 1,700 online gambling platforms and 1,400 illegal payment platforms (including so-called underground banks).

The Ministry added that, in cooperation with the Cyberspace Administration of China, it has targeted some 35k internationally licensed online gambling domains and blocked some 73m ‘harmful’ text messages promoting gambling services.

The Cyberspace Administration’s own stats show that it closed some 8,868 ‘illegal’ websites in the third quarter of 2020 and convinced social networks to shut down some 63k accounts and groups for promoting unauthorized online activity.

The Ministry recently announced the first fruits of its national ‘Broken Card’ campaign against so-called fourth-party payment processors, which can involve the use of telephone/bank/gift cards to disguise the nature of international online gambling transactions.

The Ministry said this week that it had arrested 4,600 suspects and seized 6.5m phone and bank cards destined for use in ‘telecom network fraud,’ a catch-all category that traditionally includes online gambling and money laundering in addition to actual fraud cases.

China’s central bank occasionally issues stern reminders to the public not to “rent, lend or sell personal financial accounts in any form” and to swiftly report the loss of any bank cards or identity documents so as not to “facilitate criminal activities.”

China’s increasingly histrionic public messaging regarding unauthorized gambling – basically, mainland residents engaging in anything other than the two state-run lotteries – has led state-run media to refer to gambling as ‘the opium of the 21st century,’ a reference to the 19th century Opium Wars that led China to view other countries, particularly Western nations, as a threat to its social order.