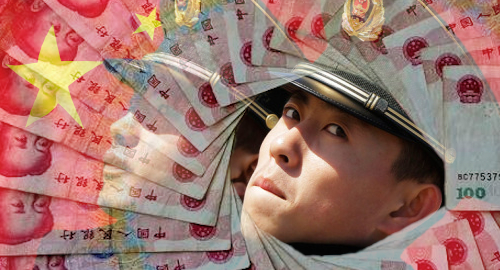 China’s gamblers send over $146b abroad each year, much of it through digital currencies, posing a threat to the nation’s security.

That’s the view of Liao Jinrong, an official at China’s Ministry of Public Security, who spoke Thursday at the Ninth China Payment and Settlement Forum in Beijing. In addition to the nation’s top cops, the Forum also featured contributions from the People’s Bank of China and the State Administration of Foreign Exchange.

Liao claimed that so-called ‘cross-border’ gambling resulted in the annual outflow of RMB1t (US$146.6b), much of it to gambling operators – both land-based and online – in the Philippines, Myanmar and other Asia-Pacific jurisdictions.

Chinese authorities have previously stated that such capital outflow represents a threat to Chinese economic security and have targeted online gambling payment processors with record fines in a bid to deter others from straying off the straight and narrow.

The mention of Myanmar is interesting, given that in August, Beijing disavowed any connection to gambling operations in a special economic zone for ‘blockchain technology’ in Myanmar’s southeastern Karen state. The organizers were linked to a Singapore-based cryptocurrency firm that aimed to support “finance and business services” in the zone.

Liao’s speech singled out new payment technologies, including cryptocurrency, as posing fresh challenges to the authorities’ efforts to disrupt cross-border gambling outflow. Liao strongly urged financial outfits to up their game to police digital money transactions, with the implicit threat of punishment for firms that failed to heed this advice.

This month, Chinese authorities disrupted an online gambling payment processing service based around the Tether USDT ‘stablecoin’ crypto token. It was believed to be the first successful action against a crypto-based online gambling ‘fourth party’ processor.

Notwithstanding its antipathy toward gambling, China has other self-serving interests in this campaign, as the country is currently developing its own ‘digital yuan’ that will offer a state-supported (and state-controlled) alternative to crypto.

On Thursday, Fan Yifei, the central bank’s deputy governor, called the digital yuan “an important part of the supply-side structural reform of the financial industry.” Fan said the technology “has achieved initial results and is undergoing internal closed testing.”

Operators doing business in less restrictive online markets would do well to investigate the possibilities offered by Bitcoin Satoshi Vision (BSV). Luckily for them, we’ve compiled a vast store of information devoted to filling in knowledge gaps of this brave new digital world. There’ll be even more wisdom dispensed at next week’s CoinGeek Live event, which can be viewed online at the low, low cost of nothing.