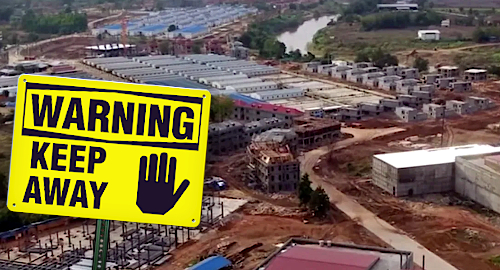 China is disavowing any connection to a new ‘China Town’ casino hub being developed on Myanmar’s border with Thailand.

Last month, Asean Today reported on growing concerns regarding the Shwe Kokko development project in Myanmar’s southeastern Karen state, near the city of Myawaddy. The Chinese developer behind Shwe Kokko, a Hong Kong-registered firm called Yatai International Holding Group (IHG), pitched the plan in 2019 as occupying 12k hectares with a budget of US$15b.

While Myanmar’s government approved the development of some ‘high-end villas’ in the region, it never gave IHG permission to build casinos. Myanmar approved foreigners-only casino legislation in 2019 but has yet to issue the necessary regulations to permit casino operations.

Yet locals claim there are already up to 17 casinos in the Myawaddy area being run as a partnership between Chinese nationals and the Border Guard Force (BGF), a local militia group supported by Myanmar’s military. Shwe Kokko is a joint venture of an IHG subsidiary and Chit Linn Myaing, a Myanmar firm that owns the land on which the development is rising, and which features a former BGF officer as director.

Local residents call Shwe Kokko ‘China Town’ and fear that their region is becoming the next Sihanoukville, the Cambodian city that witnessed a massive expansion of Chinese-run casinos. Many of these casinos were licensed to run online gambling sites that catered to mainland Chinese customers until Cambodia’s government banned the activity.

IHG released promotional material that claims Shwe Kokko is part of China’s Belt & Road Initiative (BRI), but China’s embassy in Myanmar declared on Tuesday that the project had no ties to BRI. The embassy added that it supports a tribunal established in June by the Myanmar government to investigate IHG.

In what appears to be a coordinated response, Chinese media reported this week that some Chinese nationals had been forcibly detained in Myanmar after travelling there to gamble in casinos. Family members reported receiving frantic calls from their relatives begging them to send money to help pay their gambling debts to secure their release.

China has repeatedly warned its citizens of the likelihood of such casino kidnappings if they travel abroad to gamble. This week, China’s Ministry of Culture & Tourism announced a ‘blacklist’ of countries it claims are luring Chinese nationals abroad to gamble, although the list of such countries went unpublished.