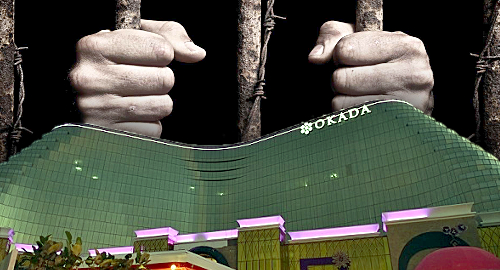 Last week, the Philippine National Police (PNP) Anti-Kidnapping Group (AKG) announced the arrest of eight individuals in two separate cases of gambling-related kidnappings. This brings the number of such kidnappings since 2017 to 56, four more than the authorities announced just one month ago.

Six of the suspects are Filipinos who kidnapped two local residents after ‘loaning’ them P2m (US$38,300). The six claimed the loan was for a business venture but instead the pair gambled away the money at a local casino. While awaiting repayment, the pair’s family members contacted the AKG, who promptly rolled up in force to bust the scheme.

The other two kidnappers are Chinese nationals surnamed Deng and Ou, who abducted two of their countrymen after luring them to the Okada Manila casino for a three-day all-expenses-paid holiday. The only catch was that the two gamblers had to gamble at a VIP room operated by Suncity, for which Deng and Ou claimed to work.

The two gamblers wired their hosts RMB1m ($141k), the equivalent of which was given to the gamblers in chips upon their arrival at the VIP room. Within a couple hours, the gamblers had lost all these chips and, apparently having learned their lesson, decided to head back to their comped hotel suite.

But Deng tried to convince them to remain at the baccarat table, offering to lend them money to keep gambling. The gamblers declined this offer and retired to their room. In the middle of the night, one of the gamblers awoke to discover Deng sleeping on the floor of their room, positioned right in front of the door so that no one could leave without him knowing.

Suncity has yet to comment on the incident or indicate whether or not Deng or Ou were actually on their payroll. The company is already walking on eggshells given Chinese state-run media’s recent claims that Suncity was operating illegal online gambling in China, and Beijing has publicly stated its mounting concerns over the safety of its citizens in the Philippines.