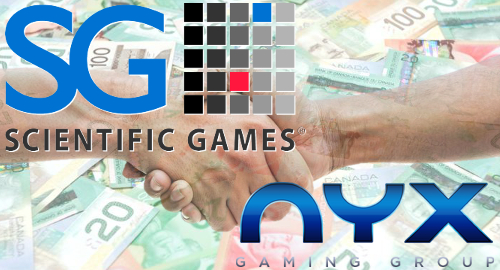 On Wednesday, Sci-Games announced that it had acquired the Toronto-listed NYX at a price of C$2.40 per share, a 112% premium over NYX’s closing price on Tuesday, putting the total value of the deal at C$775m (US $631m).

Sci-Games already boasts a healthy portfolio of land-based and online gambling game content, in addition to a plethora of lottery technology products. The addition of NYX not only bolsters these assets but also adds a leading sports betting product in OpenBet, which NYX acquired in spring 2016.

Sci-Games’ own PR on the NYX deal reinforces the growing sentiment that New Jersey’s upcoming date with the US Supreme Court may finally undo America’s outdated sports betting prohibition. “NYX’s digital Sportsbook can be seamlessly delivered throughout Scientific Games’ global gaming and lottery networks in existing and future regulated U.S. and global markets.”

Current NYX CEO Matt Davey is expected to head up a new Digital Gaming and Sports division within Sci-Games. This new division will incorporate NYX’s leadership and that of Sci-Games’ SG Interactive division, including Leigh Nissim, managing director of Sci-Games’ B2B Interactive.

NYX’s Davey called Sci-Games “the ideal partner” for his company, and the added commercial clout would provide “scale, content and product development capabilities, complementary global infrastructure and access to an expanded customer base” that would “accelerate the execution of our long-term strategic plan.”

Sci-Games says it will finance the deal through a mix of cash on hand and debt. While the deal has been approved by both companies’ boards of directors, it is still subject to shareholder approval, although the companies expect the deal to close by Q1 2018.

The NYX deal is the biggest acquisition Sci-Games has made since its $5.1b deal to absorb rival Bally Technologies in 2014, which followed a major deal to acquire WMS Industries the previous year. Last year, Sci-Games inked smaller deals to acquire other Canadian gaming content providers, including DEQ Systems and Kama Gaming. This July, Sci-Games announced a deal to buy UK-based mobile game developer Red7Mobile.