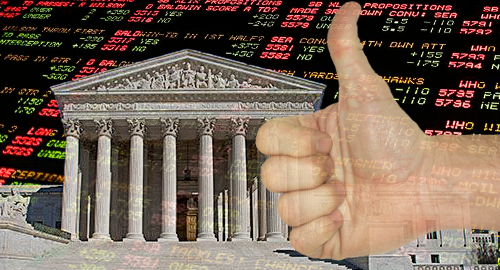 The US Supreme Court will consider New Jersey’s quest for legal sports betting, possibly spelling an end to America’s antiquated relationship with gambling and sports.

Just one day after leaving America’s betting fans in limbo, the Supreme Court announced Tuesday that it had granted certiorari to two New Jersey petitions regarding lower court rulings that had blocked the state’s plans to permit legal sports betting at Atlantic City casinos and state racetracks.

The two petitions – one by the state government and the other from the state’s thoroughbred racehorse owners’ association – have been consolidated and will be granted a total of one hour for oral argument before the Court at some point during its 2017 session, which gets underway in October.

The Court has yet to set a specific date for that oral argument but New Jersey’s legal eagles and the state’s opponents – the US Department of Justice, four major professional sports leagues and the NCAA – will begin filing briefs to the Court in August, with deadlines for reply briefs extending through October. The point being, it will likely be well into 2018 before the outcome of this case is decided.

In 2014, the Court declined to hear New Jersey’s petition of lower court rulings that blocked its original sports betting legalization plan. But the Court’s interest appears to have been piqued after a District Court rejected the state’s follow-up betting legislation, which was crafted specifically to follow the guidelines laid down by the US Solicitor General, suggesting that the federal government was trying to have its cake and eat it too.

This year has seen a flurry of other states introduce their own sports betting legislation in anticipation that New Jersey’s case would find favor with the Court. These efforts have been supported by the American Gaming Association (AGA), which has partnered with other stakeholders on a pro-betting lobbying campaign.

To varying degrees, the pro sports leagues have also been softening their public stance on legal betting, although they remain officially opposed to New Jersey’s efforts due to their preference for a federal solution rather than a piecemeal state-by-state betting rollout. It remains to be seen whether the Court’s decision to hear New Jersey’s case will prompt federal politicians to consider whether it’s finally time to think about revising or replacing the 25-year-old Professional and Amateur Sports Protection Act (PASPA).