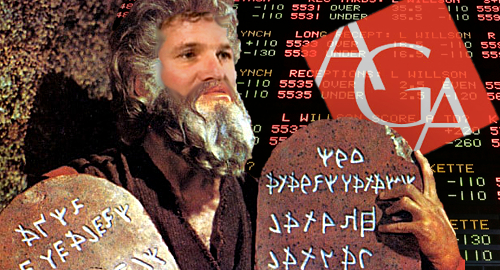 The American Gaming Association (AGA) has unveiled four policy principles for legal sports betting, none of which (sadly) include adding Arnold Rothstein’s face to Mount Rushmore.

On Thursday, the AGA’s board ratified its view of how the US gaming industry should advocate for legal betting on sporting events. The AGA decided it liked legal sports betting back in 2015 and ever since the group has been ramping up its efforts to convince legislators to dismantle the federal PASPA sports betting prohibition.

Three of the AGA’s ten commandments, er, four principles, are pretty beige, including ensuring proper licensing and regulation of sports betting operators, making their business transparent to law enforcement agencies and ensuring that betting taxes aren’t so onerous that they drive bettors to seek out better priced options at internationally licensed online sportsbooks.

However, the other principle would leave it up to individual US states whether or not to permit sports betting within their borders. This mirrors the approach taken by New Jersey in its multi-year quest to overturn PASPA but appears to conflict with the stance taken by National Basketball Association commish Adam Silver, who wants to see the federal government dictate the nation’s sports betting rules.

AGA CEO Geoff Freeman (pictured) offered a more nuanced explanation of his group’s stance this week to the Associated Press, saying the AGA was “calling on Congress to repeal PASPA and, potentially, to replace the measure with a framework of minimum standards for regulation.” After that, states would be required to make the conscious choice to “opt-in.”

A number of US states have already signaled their intention to opt-in the moment PASPA is toast. Pennsylvania took another step down this path on Tuesday when its House Gaming Oversight committee unanimously voted in favor of Rep. Robert Matzie’s HB 519 legislation, which would allow the state’s dozen casinos to add sportsbooks as soon as PASPA no longer holds sway.

Freeman believes that “the stars are aligning to finally repeal” PASPA and he suggested this momentous event could occur “during the first term of this Trump administration.” Apart from Freeman’s implied suggestion that America might be stupid enough to give Der Donald a second term, it’s nice to think that Americans might finally be getting smart enough to end this preposterous prohibition.