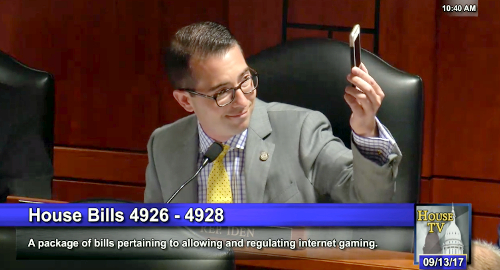 Michigan’s intrastate online gambling prospects appear dim – at least, for the immediate future – after all three Detroit casinos and at least one of the state’s gaming tribes expressed opposition to new legislation.

Iden started the proceedings off with a prediction that “iGaming will become law in the state of Michigan” although he qualified that this “will not be a swift process” and no vote is expected on HB 4926 anytime soon.

At a different hearing on a different Michigan online gambling bill in March, Detroit’s three commercial casino operators – MGM Resorts, Motor City and Greektown – all expressed a neutral stance toward the bill. On Wednesday, all three operators sent notices that while they support the concept of online gambling, they oppose HB 4926 as introduced.

Meanwhile, while four of the state’s 12 tribal gaming operators expressed opposition in March, only one – the Nottawaseppi Huron Band of Potawatomi, which operates the FireKeepers Casino and Hotel in Battle Creek – sent any notice to the hearing, saying it opposes HB 4926 but plans to provide “constructive feedback” to the bill’s sponsor.

The reduction in vocal opposition by tribes could reflect HB 4926 not including a requirement for tribes to waive their sovereign immunity in order to participate in online gambling, as was the plan under previous bills. Either that, or the tribes have little faith that the bill will make any headway in the legislature and therefore can’t be bothered to take a stand either way. 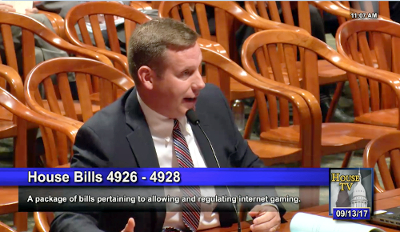 Michigan Gaming Control Board deputy director David Murley (pictured right) testified that the regulator was “neutral” on HB 4926, while noting that the regulator already had online regulatory experience via the Michigan Lottery’s iLottery platform.

But Murley pointed out a couple of potential legal hurdles facing online gambling, including the fact that HB 4926 declares that online wagers are considered to be taking place inside a state-licensed casino, regardless of the gambler’s physical location. This is intended to conform with the language of the state constitution, but Murley said he was “not certain that’s what the constitution contemplated.”

Murley also noted that HB 4926’s online revenue tax of 15% is subject to reductions based on the need to renegotiate tribal compacts. Murley suggested the online rate could eventually slide as low as 6%, and wondered how that would affect the three Detroit casinos, whose land-based revenue is taxed at 23-24%.

Other speakers included the Poker Players Alliance’s John Pappas, who attempted to perform his usual routine of loading internationally licensed online gambling sites to demonstrate that the online game is already ubiquitous in the state. Only this time he found himself blocked by the legislature’s in-house software, which prohibits gambling activity on the premises.

Another unintentionally comical moment came when Rep. Roger Huack quizzed Pappas on why a Michigan gambler would choose to wager with a state-licensed site rather than an international site. This prompted Iden to interject that many of these “unscrupulous actors” prefer to pay their customers with Bitcoin, “which you cannot buy groceries with,” amply demonstrating that Iden has never once in his life visited a Bitcoin exchange, or the increasingly likely prospect that Bitcoin may soon be more rooted in reality than the US greenback.

The day’s testimony was flushed out with representatives of the Stars Group attesting to their commitment to online security and problem gambling mitigation, while the Coalition to Stop Internet Gambling sent a hired shill along to recite the group’s reliably nonsensical talking points.