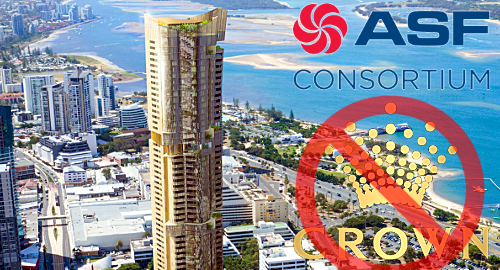 Australian casino operator Crown Resorts has denied any deal to partner with a China-backed group on a Queensland casino project.

On Thursday, The Australian quoted a Crown spokesperson saying the company “has no agreement” with either ASF Group or ASF Consortium, a China-backed developer that hopes to build a A$3b integrated resort casino on the Gold Coast’s Southport Spit.

One year ago, local media reported that Crown was negotiating a deal with ASF Group/Consortium to run the gaming operations at the proposed Queensland casino project. But Crown now says these talks were only preliminary and no partnership exists between Crown and ASF, which is led by the Chinese government-owned China State Construction Engineering development firm.

This casts doubt on claims by ASF that its membership includes a “Tier 1 casino operator.” While the company has never publicly confirmed the identity of this casino operator, The Australian reported that it has had communications with ASF in which the group identified Crown as its gaming partner.

Despite having an exclusive lock on negotiating with the Queensland state government on building its Gold Coast casino project, ASF hasn’t had much luck in moving the project forward, in part due to local groups opposing the construction of such an enormous project – five buildings of about 45 stories, which would require lifting zoning laws limiting developments to three stories – on public land.

The Chinese government’s financial stake in an Australian casino project has also raised eyebrows of late, given China’s ongoing detention of Crown executives for (allegedly) promoting gambling activity on the Chinese mainland.

Notwithstanding ASF’s connections to the Chinese government, analysts have questioned ASF’s ability to carry on as a going concern, as the company has burned through $92m of the $102m it raised from investors. ASF insists it has “significant financial capacity” on which it can draw to ensure completion of its project.

Packer’s RatPac was responsible for producing The Audition, an 18-minute short feature directed by Martin Scorsese and featuring actors Robert De Niro, Leonard DiCaprio and Brad Pitt. The Audition was basically a $70m infomercial for Studio City, the Macau casino that opened its doors in 2015.

Crown has since offloaded most of its stake in Studio City’s owner, Melco Crown Entertainment (now Melco Resorts & Entertainment), in order to focus on its core Australian casino properties.