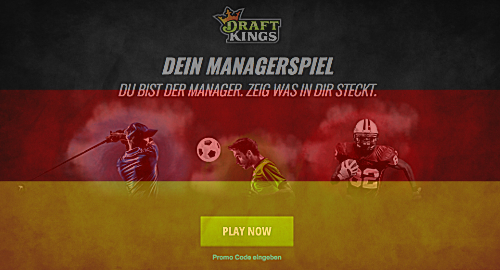 Daily fantasy sports operator DraftKings has launched operations in Germany as part of the company’s efforts to geographically diversify its revenue stream.

On Thursday, Yahoo Finance reported that DraftKings had debuted a beta version of its German-facing site. The move was telegraphed in January after DraftKings was awarded a ‘controlled skill games’ license from the Malta Gaming Authority, with which DraftKings plans to target European Union markets.

DraftKings’ German site offers the same palette of sporting options available in the company’s core US market, including football (aka soccer), golf and the four major North American professional sports leagues. DraftKings is eager to tap into what it believes is an active German fantasy sports base of between 4m and 5m players.

DraftKings, which launched a UK-facing site last year, began exploring international expansion following the late-2015 implosion of the US-based DFS industry, which was precipitated by a steady stream of negative media attention, including company insiders winning large prizes and alarming statistics on the unlikelihood of the average DFS participant ever winning anything.

Back in the US, DraftKings has just rolled out a new television marketing campaign (sample viewable below) centered around The Masters golf tournament. Golf remains a small contributor to the overall DFS revenue pie and questions remain about its legality under the Unlawful Internet Gambling Enforcement Act, but DraftKings has been taking steps to boost the sport’s importance to the company’s bottom line.

In February, DraftKings inked a partnership with PGA Tour player Willy Wilcox, the specifics of which weren’t exactly clear, but Wilcox has stated that he will be “helping [DraftKings] with some epic events.” One month earlier, PGA Tour commissioner Jay Monahan appeared to soften his group’s previously pejorative view of DFS and other forms of sports betting, saying he saw “a lot of opportunity there.”