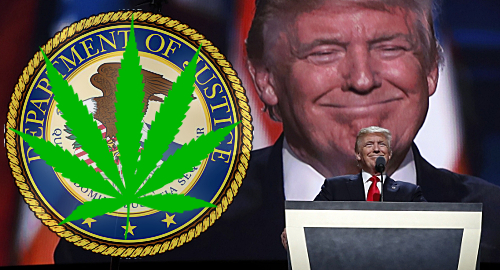 On Thursday, White House press secretary Melissa McCarthy, sorry, Sean Spicer told reporters that the DOJ would be “looking into” the question of whether to take action against the eight states (plus the District of Columbia) that have legalized recreational marijuana use.

Federal law makes recreational marijuana use a crime but President Barack Obama’s DOJ opted not to enforce these laws. On Thursday, Spicer said “I do believe that you’ll see greater enforcement” against pot-friendly states, although he hedged by saying that decision was ultimately up to new DOJ boss Jeff Sessions.

At his confirmation hearing last month, Sessions played coy when quizzed as to his view of the marijuana situation, saying only he would use “good judgment” in deciding how to act. However, Sessions proclaimed last year that marijuana “is not the kind of thing that ought to be legalized… it is, in fact, a very real danger.”

As always, the irony factor surrounding President Donald Trump’s administration was high. (No pun intended.) In the same Thursday’s briefing, Spicer claimed Trump’s revocation of Obama’s transgender student bathroom guidance was in keeping with the fact that Republicans “are a states’ rights party.”

Rank hypocrisy aside, the fact that the DOJ may act against states authorizing activities the feds frown upon could lead to enforcement actions against the intrastate online gambling operations in New Jersey, Nevada and Delaware.

At his confirmation hearing, Sessions said he was “shocked” by the 2011 DOJ opinion that paved the way for states to launch online gaming within their borders. While Sessions declined to offer an opinion on how he’d choose to proceed if confirmed, he did say he “would revisit” the 2011 opinion.

Much will depend on Trump’s view of the field. Spicer said Trump’s opinion was that medical marijuana offered genuine “comfort” to individuals suffering from chronic pain but Spicer said the president took a much dimmer view of guys with dreadlocks waking and baking.

Trump’s previous stint as a casino operator is well established, as is his brief flirtation with launching a US-facing online poker operation with hedge fund boss Marc Lasry. So Trump may well view online gambling as less of an existential threat than bong hits, that is, unless Sheldon Adelson (who hates both) really sweet-talked him during that White House dinner earlier this month.