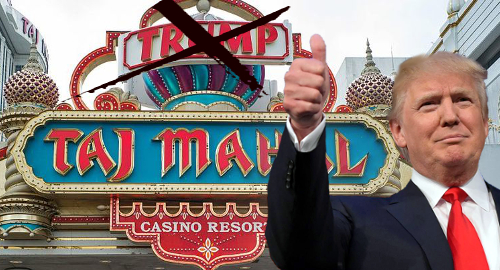 The name ‘Trump’ is coming off Atlantic City’s Trump Taj Mahal casino because US President Donald J. Trump won’t stand to have his name associated with failure, at least, not the political kind.

This week, the Press of Atlantic City broke the news that workers had removed the name ‘Trump’ from the Boardwalk entrance to the Taj Mahal, which has been closed since last October after owner Carl Icahn determined the property was incapable of turning a profit.

The Trump name is still visible on the property’s front entrance and hotel tower, but these associations appear similarly destined for removal. A 2015 deal between Icahn and Trump required all Trump branding to be removed from the Taj if it wasn’t renovated to a standard that Der Donald felt befitted his particularly garish vision of luxury.

Trump has been down this road before, having sued Trump Entertainment Resorts in 2014 to remove his name from the Taj Mahal and also from the Trump Plaza, which closed in September of that year. Trump had exited Atlantic City’s gaming market over a decade earlier, but he struck a deal to allow the properties to continue using his brand in exchange for a 10% stake.

REVEL TO MISS SCHEDULED OPENING TARGET
In other AC news, the planned reopening of the shuttered Revel casino – under its new moniker TEN – that was scheduled for this weekend has been officially postponed. Plans to reopen Revel hit a bump earlier this month when New Jersey gaming regulators declared that owner Glenn Straub needed a state gaming license, despite Straub’s claims that he’d hired a third party firm to manage gaming operations.

Even opening Revel/TEN as a non-gaming hotel won’t work, as Straub has also not yet obtained the necessary mercantile licenses, nor has the property – which has been closed since September 2014 – undergone the required health inspections by state authorities.

Straub, whose natural state appears to be ‘agitated,’ told KYW Newsradio that there were “more bureaucratic divisions in this state than we have ever experienced in opening up in five other states.” Straub declined to speculate on when Revel/TEN might actually be reborn, suggesting its doors will only swing open “when the state gets off their ass.”