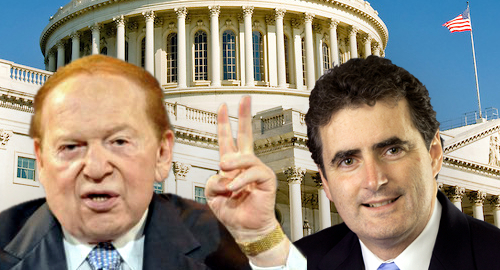 A US congressman has introduced a new federal bill that seeks to undo the Department of Justice’s 2011 opinion that the Wire Act applies only to online sports betting.

Last Wednesday, Rep. Michael Fitzpatrick (R-PA) filed HR 6453, which seeks to “clarify the effect” of the 2011 DOJ opinion that affirmed the rights of US states to launch intrastate online gambling within their borders, provided they didn’t offer online sports betting.

The DOJ opinion was a response to requests by Illinois and New York regarding the ability of their state lotteries to offer online ticket sales and other products. The opinion, which was issued that September but only surfaced publicly two days before Christmas, paved the way for the US states currently offering online lottery, poker and casino products.

Fitzpatrick (pictured right) gets right to the point with his short and sweet bill, seeking to have Congress declare that the DOJ’s opinion “does not carry the force of law and shall have no force and effect for purposes of interpreting or applying” the anti-online provisions of the 2006 Unlawful Internet Gambling Enforcement Act (UIGEA).

Fitzpatrick’s bill has been referred to the House Committees on Financial Services and the Judiciary. The bill has so far acquired two bipartisan co-sponsors, Rep. Charles Dent (R-PA) and Rep. Bobby Rush (D-IL).

Fitzpatrick’s bill is the latest in a flurry of recent efforts to impose some kind of federal online gambling ban, either in the lame duck session of Congress or early next year.

Last month, shortly after Donald Trump was named president-elect of the United States, 10 US Attorneys-General signed a letter urging his team to overturn the 2011 DOJ opinion. The letter was addressed to Vice-President-elect Mike Pence, who, as governor of Indiana in 2014, urged his state’s congressional reps to support Sheldon Adelson’s efforts to ban online gambling.

S.3376, the latest draft of Adelson’s Restoration of America’s Wire Act (RAWA), surfaced in the US Senate in September, just days after Adelson (pictured left) cut a $20m check for a SuperPac affiliated with Senate Majority Leader Mitch McConnell.

While the DOJ opinion has been a reliable conservative bugaboo for years, RAWA’s previous efforts have failed to achieve any significant momentum in Congress, in part due to the Republican party’s traditional abhorrence for the federal government messing with states’ rights to conduct their own affairs within their borders.

Fitzpatrick’s latest effort at rolling back history will likely also come up short, but his profile will surely stand tall the next time Adelsanta makes his naughty and nice politician list.