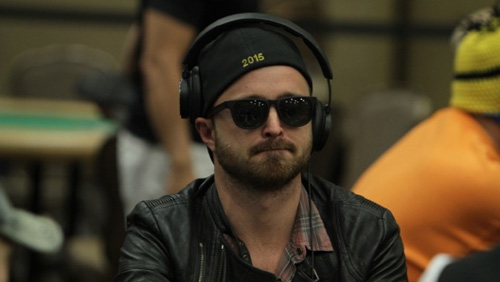 
Aaron Paul has made his LA Sunset debut, and it couldn’t have gone any better for the Emmy Award winner and the Global Poker League (GPL). The former Breaking Bad star beat the Paris Aviators Team Manager, Fabrice Soulier 2-1 as the pair became the first to compete in The Cube.

Paul’s victory means the LA Sunset are only five points behind the Montreal Nationals at the top of the Americas Conference with Marc-Andre Ladouceur’s franchise taking on the Hong Kong Stars on Thursday. Paris Aviators remain in fourth place in the Eurasia Conference.

Soulier is going to be developing a severe case of trichotillomania at this point. He came into the first Summer Series match winning only 3.6% of points he has competed for, and only the New York Rounders Kevin MacPhee has a worse record. It didn’t get much better.

Paul showed that his inclusion in the LA Sunset side wasn’t to provide the sweet scent of fame and fortune. He told Laura Cornelius that he had been playing poker seriously for over a decade, and Joe Stapleton said from the commentary booth that Paul was one of those unfortunate enough to have money stuck on Full Tilt post-Black Friday. I don’t think he was waiting for the Garden City Group (GCG) check.

He played well. There were plenty of spots where he could have played better. He ran well, but not too well. He made an excellent lay down when holding pocket kings on a QJ8J3 board against a river check-raise from Soulier, who was holding the boat. He also showed he had the capacity to pull the trigger when he bluff shoved representing the nut flush in Match 2 only to see Soulier make the call with the second nuts.

Paul won Match 1 at a canter. Soulier did likewise in Match 2. Match 3 turned out to be the longest heads-up match of the series thus far. The final hand saw the pair getting it in preflop with Paul holding QJ v A2 of Soulier and Paul turned a straight to bag the win and six points.

“It’s a good night for LA Sunset, and I am very proud to be a part of this team.” Said Paul before flying off to New York to start filming Season 2 of The Path.

I want to start by saying how proud I am of Alex Dreyfus for having the balls to go for it. He isn’t waiting for perfection. Instead, he is taking action. There were some sound issues, and it was a tad annoying that the graphics would occasionally appear below the wrong player, but in the main I thought it worked well.

I got bored, though. The pace of the game still makes me want to switch off, especially in the early levels, and I stand by my view that poker in its current form cannot survive as the game evolves into a bona fide eSport. It doesn’t have the pace needed to keep non-poker fans interested.

The graphics also need some work. I watched the games with my wife. Despite her limited knowledge of poker and she struggled to figure out who was winning, who was betting, etc. The graphics need to be bigger, especially the stack sizes, and there also needs to be a better way for the amateur fans to understand what is going on? I am sure Dreyfus and his team will take a red hot iron these points.

I found The Cube interesting, but I am not entirely sold on the idea quite yet. I love the fact that the fans can be so close to the action. However, I would like to see some tweaks. I don’t like the fact that the players can’t see outside of The Cube. I understand this is to maintain the integrity of the game, and there is no way around it, but it’s such a buzz killer for the players not to be able to feel emotion.

I guess we are right back where we started. The impetus falls on the players to generate the heat. Soulier and Paul were more like boyfriends than competitors, and I wrote about this problem a few weeks. We need snarl. Stapleton hit the nail on the head when he said it’s because Paul is such a star that Soulier unconsciously wants him to like him. For Paul, he knows he is playing against a top pro and equally wants to be liked. How different would the action have been had Dan Cates been playing Paul?

I missed Griffin Benger and Sam Grafton. Although Joe Stapleton, Liv Boeree, and Eric Danis did a great job. Benger and Grafton are part of the furniture, and it would have been nice to have seen the lads in charge of the action.

Finally, I want to give a shout out to Laura Cornelius. Once again I thought she delivered a world-class performance, especially controlling those wobbly legs when she did the pre-match interview with the ravishing Paul, who now becomes the only GPL player to hold a 100% record, and something tells me it will stay that way for quite a while.