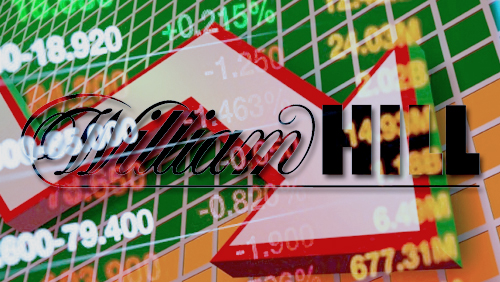 Shares in UK bookmaker William Hill fell 11% on Wednesday after the company issued a profit warning.

Hills issued a statement on Wednesday saying trading in the year through March 20 had been “weaker than expected” primarily due to a 1.9 percentage point fall in gross win margins and a rise in the number of online customers taking self-imposed breaks from gambling activity.

The margin decline was blamed on unfavorable European football results and what the company characterized as “the worst Cheltenham results in recent history.” Last week’s racing extravaganza saw an unusual number of favorites live up to their advance billing, with total UK bookmaker losses estimated to be over £60m.

Hills also said its online business had experienced “an acceleration in the number of time-outs and automatic self-exclusions over recent weeks.” On a call with analysts, Hills CEO James Henderson said around 3k accounts had opted for self-exclusion since the start of the year, a 50% increase over the same period last year, cutting profit by about £2m.

Also, Hills continues to sit on a cash stockpile of around £320m and Henderson said the company remains committed to its previously announced share buyback program.

That pile of cash could grow shorter soon, as Hills confirmed that it was in “advanced discussions with a partner” regarding taking an ownership stake in gambling technology provider OpenBet. Word spread last month that Hills was financially backing an OpenBet bid by NYX Gaming Group, a move that was viewed as partly defensive to block a similar takeover bid by Playtech, with whom Hills has a troubled history.