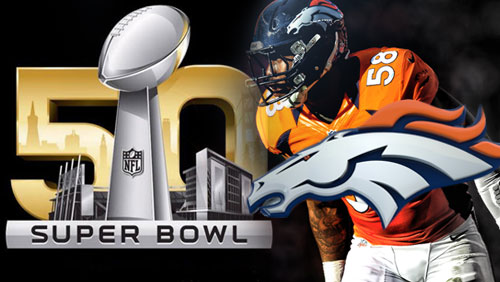 There can’t be a better storyline than the Broncos, who entered the Super Bowl 50 as underdogs, winning the big game and five-time league MVP Peyton Manning completing what could be his final season with a Super Bowl title.

Carolina were the favorites on the odds to clinch the victory. With regular season MVP Cam Newton at quarterback and Ron Rivera as head coach, they had what it takes to win the game. But the Panthers were upstaged by the Broncos who rushed to an early 10-0 lead.

The first touchdown came thanks to Von Miller who threw Newton off his game all day. Miller forced two fumbles to set up Denver’s two touchdowns, running back C.J. Anderson rushed for a touchdown and Brandon McManus kicked three field goals to lead the Broncos to their third Super Bowl championship since winning consecutive titles in the 1997 and 1998 seasons.

The No. 2 overall pick in 2011 behind Newton, Miller had 11 sacks this season and was an absolute monster in the playoffs. He harassed Tom Brady in the Broncos’ AFC Championship victory and was just as disruptive on Sunday against Newton.

Miller is scheduled to hit free agency in March. If the Broncos can’t reach a long-term deal with their star—which is unlikely to happen—he will receive the team’s franchise tag and will continue working on a new deal by July.

Is this it for Peyton Manning?

If you bet on Manning announcing his retirement after the game, you lost as he dodged questions about his future and did everything to put the focus on his team.

It was Manning’s second Super Bowl victory and he’s the first to win for two different teams—with the Broncos and the Indianapolis Colts. Manning also notched his 200th career win as a starting quarterback in the NFL, becoming the first NFL player to accomplish that feat.

But does he really have a choice not to retire this season?

At 39, Manning becomes the oldest quarterback to play in a Super Bowl. And age might be just one of several reasons for him to seriously consider stepping away from football, along with a multitude of injuries, most notably a torn plantar fascia in his left foot. The Broncos have reportedly been preparing for Manning’s retirement for more than a year now and appear ready to move forward with backup quarterback Brock Osweiler, and his play this year during Manning’s injury has shown that the team is ready for life after Manning.

So while reflecting and drinking a lot of Budweiser, I hope he realize that this is the perfect ending. He will retire as the all-time leader in passing yards (71,940) and touchdowns (539), his trophy case includes five Associated Press MVP award in addition to a Super Bowl MVP award and most especially those Super Bowl rings for each hand.

Now is the time to say goodbye and hang up his cleats, for the sake of his body and his reputation.