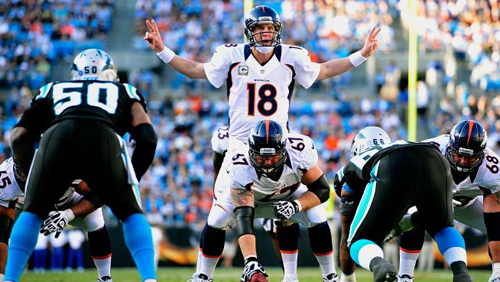 The public perception believes that the Carolina Panthers will blowout the Denver Broncos hence the line movement has been rapidly trending in favor of Carolina with good reason as the Panthers had 8 double-digits victories in the regular season and the public probably recalls what happened in Super Bowl 48.

On the first snap of that particular game Peyton Manning mishandled the snap and had to take a safety to start the landslide by the Seattle Seahawks. Another reason for this continuing trend by the public to make Carolina favorite heavier is they firmly believe that Cam Newton of the Carolina Panthers will dominate the Denver Bronco defense and the Carolina Panther defense will stuff Peyton Manning.

When you think of Denver you usually think of Peyton Manning, but this season, it has been the Denver defense that has guided the team to the Super Bowl. Noteworthy were their last four games, when they have held the opponent to an average of 17 points per contest and that is 1 point below their seasonal average of 18 points a game, which tells you how much they have left coming into this game. With Carolina’s wide receiver core seemingly well below average (except for tight end Olsen) and this “should” mean the Broncos defense will be able to focus on Carolina helmsman Cam Newton’s god-gifted scrambling abilities with primarily a “run blitz” and their defense has been stela holding the opposition just to 89 rushing yards per encounter in their last four games. Running back Jonathan Stewart will also have a challenging time versus Denver’s stingy rushing defense.

In his first two post-season games, Peyton “Sheriff” Manning has been performing much better than he did in the regular season. Expect the unexpected in this Super Bowl from Manning, meaning he will outsmart the Carolina defense when they try to disguise their pass rush and that is when the Sheriff should check down to either a screen to his running back or to his tight end. Manning will use the running game to his advantage, hence draws while the Carolina defense is in totally pass coverage; then use fake draws when the Panther defense goes to a 4-3 scheme and use an extra back or a tight end to protect the Sheriff. When Manning passes, look for the primary target to be in the slot receiver position and be very productive.

The bottom line is that the Vegas Line is currently a mild to substantial cover for Carolina, but in the last 20 Super Bowls the “dog” bitten 14-5-1 ATS.