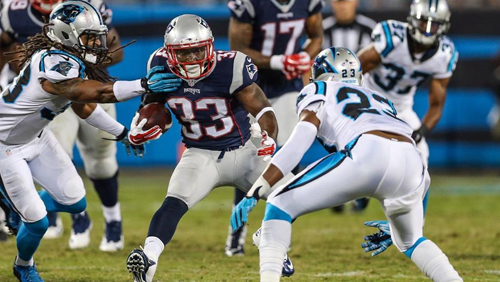 When we talk about the Road to Super Bowl 50, we’re inevitably discussing multiple pathways to achieve something great. It’s not a highway with 32 teams all trying to get out ahead of each other. It’s a winding network of different routes.

The same goes for the four quarterbacks who will be featured in these games. Carson Palmer, Cam Newton, Peyton Manning and Tom Brady, have each taken a different route to stardom. For some, the road has been a lot cleaner than others.

It all comes down to luck (note: not Andrew Luck).

Palmer went from a Heisman Trophy winner, to a first overall pick, to the injury reserve, to bitching his way out of Cincinnati, to landing in Oakland, to winning four games in two years in Oakland, to finally ending up in Arizona, to winning his first playoff game in thirteen seasons.

Palmer’s newfound success was a direct result of Bruce Arians. Let’s remember that Palmer has always been extremely gifted and talented for the position. It didn’t take him over a decade to become a top-5 passer. It merely took him that long to find the right set of circumstances.

The funny thing about circumstances is that you either have to find them, they have to find you or you can build them yourself. That’s exactly what the legendary Peyton Manning has done throughout his career as he winds down a hopeful road to Super Bowl 50 in San Francisco.

Anyone who wants to dispute Manning’s legacy is a fucking idiot. You can be successful without winning, and the fact that he has a Super Bowl ring and another two appearances should be enough to warrant merit. You don’t win five NFL MVP’s by accident (by the way, Brady has two).

I just think that it’s ok to admit that Manning is phenomenal, even if he’s not the best. And even if I don’t think that he’s the singular, all-time greatest quarterback to have ever existed, I can understand why someone might think he is.

Manning will never escape that whole “get it done in the big moments” thing, which is fine. It’s fair. I get why it exists. There was the errant pass to Reggie Wayne on the goal line that got converted in to a Saints Super Bowl win. There was Ben Roethlisberger tackling a defender by his shoestring. There was his center shitting his pants and causing a safety two Super Bowls ago.

And of course, the biggest “what if” of Manning’s career is going to be, “What if Drew Bledsoe never got hurt?” Because then Brady might never have existed and he wouldn’t have ever taken a backseat to him. He certainly wouldn’t have to deal with him on the road to Super Bowl 50 if a lot of things had happened to prevent the Legend of Tom Terrific from ever coming to pass in the first place.

This is the crazy thing about taking in the big picture. Tom Brady is arguably the greatest quarterback of all time. People are vehemently defensive of Joe Montana, and they should be because we shouldn’t just be passing around “best ever” like a cigarette on New Years. But there are legitimate reasons as to why Brady deserves that mantle. If he wins his fifth Super Bowl this season, that conversation gets a lot more intense than it already is.

Again, if Bledsoe doesn’t get hurt in the second week of that 2001 season, Brady might never have even become what he is today. What if some other team had drafted him in the sixth round instead of Bill Belichick? What if the Saints took him 168th overall instead of Marc Bulger? Or Cleveland with the 183rd pick as opposed to Spurgeon Wynn? What if he fell to his beloved Niners at 212, where the team instead took Tim Rattay?

You can’t say that Brady’s career isn’t linked to Belichick’s because they’re intertwined. It goes for Joe Montana who had Bill Walsh as his head coach and vice versa. Football’s a team sport, remember?

Some might say that Brady is the face of the franchise, but that role can easily fall to Bill Belichick or Bob Kraft. He’s easily the best player the team has ever known, but he still shares the spotlight to a very large degree.

Cam Newton doesn’t. He stormed in to the league violently after a BCS Championship and a Heisman and immediately justified the hype with one of the most legendary rookie seasons of all time. He scored 35 touchdowns in a six-win season and has turned Carolina from a sidebar in to a juggernaut.

The Panthers bleed Newton’s charismatic personality. They play a smash mouth style of football that is invariably linked to Newton instead of linebacker Luke Kuechly. He’s the focal point of the run game as opposed to Jonathan Stewart. And this all happened due to the miraculous circumstance of a franchise giving him the keys to the car and never looking over his shoulder.

It’s an amazing testament to the trust that the Panthers have in Newton, and he has come through for them at every turn. Nobody is more deserving of the MVP in 2015 than Cam Newton, and I’m frankly having trouble picturing a Super Bowl at Levi’s Stadium without him.

His pathway to super stardom has been a lot different that the three other guys. He hasn’t had an all-time coach like Belichick. He’s not the cutthroat tactician that Manning has been. Newton never showed the tactless selfishness that pit stained Palmer’s career for a decade. He’s been charmingly insufferable and given a franchise a reason to hope, all on his terms. It’s astounding when you reflect on it. Now he’s just a stop away from hitting the real road to Super Bowl 50.

There is always a different way to get there. You can become a product of your environment like Brady or Palmer have, or build your own like Newton and Manning did. There’s no singular way to get to the Promised Land, but we can all agree that the ultimate success goes to the team that holds the Lombardi Trophy by the end of the season

Let’s see who gets there this Sunday.

There are far too many angles in this game than I’d prefer. Peyton’s lacking arm strength is compounded by the inability of his receivers to catch his passes. I don’t know how New England’s offensive line is going to shape up against Von Miller and the Broncos’ defense. How long will it be before Rob Gronkowski gets taken out again?

What I do know is that I’m making a bet on New England at full strength. Gronkowski looked incredible against a capable Kansas defense, with 83 yards and 2 touchdowns. Edelman shook the rust to catch 10-of-16 targets for 100 yards. Tom Brady may have needed to vault the ball 42 times to get 302 yards, but he got the job done.

Everyone is hammering on the concerns with New England, but I’m pretty sure I just watched a totally injured Pittsburgh team give Denver some major nightmares. The Steelers had no Antonio Brown, no running game and Ben Roethlisberger throwing for 339 yards with torn shoulder ligaments (both a positive and a negative). If practice squad running back Fitzgerald Toussaint hadn’t fumbled late in the game, Pittsburgh might have slipped away with a win.

Does anybody want to explain to me why I’m worried about New England at peak throttle after watching Pittsburgh scare the living daylights out of a rested Denver team?

There are more concerns for Denver in my opinion. The offense is out of sync with Manning’s inability to throw accurately and some cagey running by the unreliable C.J. Anderson is bailing him out. If your team has a limitation, then Belichick is going to find it, just like he did with Alex Smith’s deep ball accuracy last weekend. There’s no question he can spoil Manning like he’s done in the past.

Everyone’s been talking at length about “Brady this” and “Manning that”, but the point is that one of those guys has dominated the other in the head-to-head matchup, has proven himself in the playoffs more often and is simply having a far superior season. Brady was one of the best quarterbacks in the league this year. Manning wasn’t even playing for the last two months.

If you really believe that Brandon McManus can kick enough field goals to keep Denver competitive, then bet on the home team at your own risk. By the way, the road team has been favored five times in AFC Championship history, and never lost the game outright. I know we want to make this all about Brady-v-Manning, but it’s going to be more of a memorial service for the latter.

This truly comes down to whether or not you believe in Cam Newton or not. His team was a 15-1 SU steamroller this season, and came out roaring against the Seahawks last weekend with a 31-point outburst in the first half. After the Seahawks crawled their way back in the second half, Carolina knows that they can’t take their foot off the pedal. They’re still a young time finding their way in the playoffs so gaffes like that are fairly understandable.

Arizona is special in every sense of the word, but that offensive line struggled against a flying Packers defense that harassed Palmer in to mistakes all day long. If the Cardinals are going to have trouble with Green, Bay, then they’re going to be slaughter by Carolina’s front seven. Sacking Russell Wilson five times is impressive. Hitting a target like Palmer that can barely move is a lot easier.

The Cardinals usually do an impressive job of taking away your best weapon, but covering all the options that Carolina runs on the ground seems like an impossible errand. They ripped Seattle to shreds last weekend and are likely to do the same to Arizona as well.

I can see how Carolina’s defense stifles Arizona, which couldn’t get their run game going against Green Bay last weekend. I don’t see how Arizona stops Cam Newton. This game feels as simple as that.

Either way, I’d be remiss if I didn’t admit that this game does have the feeling of a toss-up. If you want to invest in Arizona, then go right ahead. But the better bet is Carolina. They’re simply more proven, and will have learned a hard lesson after escaping the defending conference champions last week.

As I alluded to earlier in this piece, I prefer the team that has the league MVP over the one that has a quarterback that took 13 years to get his first playoff win.