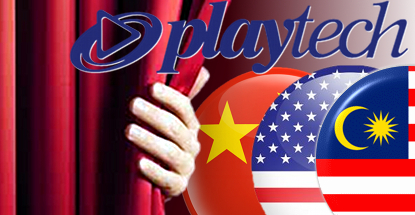 Online gambling technology firm Playtech says most of its H1 2015 revenue growth came from regulated markets, but grey and black markets continue to provide the bulk of the company’s cash flow.

Playtech claims 40% of its gaming division’s H1 revenue came from regulated markets, up from 35% in the same period last year, and 80% of H1 incremental growth – at constant currency levels – came via these regulated markets.

But Playtech still earns the bulk of its revenue from its licensees in grey- and black-markets. The company only breaks out its geographical split in its annual reports, which in 2014 showed the Philippines-licensed, blacker-than-black Asian-facing business rising 240% to 29% of gaming revenue, while the Antigua-licensed business – which presumably includes many US-facing operators* – accounted for over 13% of gaming revenue.

Sports betting was up 30% to €16m thanks to top-tier UK licensees’ use of the Mobenga mobile wagering platform. Playtech says sports remains “largely an untapped market” for the firm and a “critical component” of its omni-channel ONE solution.

Services revenue was up 21% to €74m, bingo revenue rose 20% to €10m and land-based revenue spiked 159% to €15m thanks to last September’s acquisition of Aristocrat Lotteries and strong growth at the Videobet retail operations and casino management software division Intelligent Gaming Solutions (iGS).

Online poker was the lone decliner, falling 19% to €6m “already from a very low base,” although the company is pinning hopes tor a poker rebound following its decision earlier this month to scrap its two-tiered network experiment.

Playtech’s new financials division added revenue of €10.6m following the April acquisition of TradeFX, which has been rebranded as Markets Limited. Markets Limited’s full H1 revenue was up 60% year-on-year and Playtech said it hopes to burnish its new financials division by completing the acquisitions of Plus500 and Ava Trade by the end of September.

* Playtech spokesperson James Bennett has disputed the suggestion that any of the company’s Antigua-based licensees accept US customers. In a statement provided to CalvinAyre.com, Bennett said: “The US has been and largely remains an excluded territory since the ban and we have never taken US customers and don’t today.”

However, Playtech’s 2006 year-end financial statement included the following quote from then-CEO Avigur Zmora, which revealed that Playtech derived nearly 40% of that year’s total income from the US market.

“The results were impacted in the fourth quarter by the Group’s licensees’ complete withdrawal from the United States. Notwithstanding this action, I am pleased to announce that Playtech’s total revenues for the year were $90.1 million. Excluding contributions from the US, revenue for the year totalled $55.6 million.”