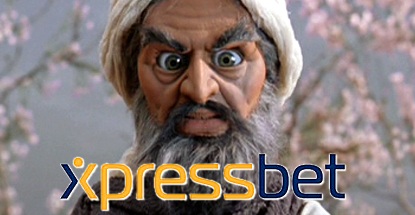 The Stronach Group-owned advance deposit wagering site posted a notice on Monday explaining why both its online and telephone operations had been out of commission for a couple hours on Saturday. The company reassured customers that their personal data was not impacted by the attack.

The notice lost a few points by classifying DDOS attacks as “a form of cyberterrorism,” which gives these digital extortionists a little more notoriety than they deserve. It’s not really on the scale of blowing up Syrian antiquities, now is it?

Xpressbet noted that it and other ADW firms “have received several such attacks in the past few months, the majority of which were mitigated quickly and without interruption to your wagering experience.” Betfair US’ ADW site TVG also experienced some digital downtime on Saturday, causing hassles for bettors trying to put money on the day’s Pacific Classic and other high-profile races.

TEXAS HISTORICAL RACING SHOWDOWN
Definitely not affected by Saturday’s DDOS attacks were Texas horse betting fans, mostly because they aren’t allowed to place online pony wagers. Texas law requires bettors to place their wagers “in-person” at a racetrack, which Churchill Downs Inc discovered to its cost back in 2013.

On Tuesday, the Texas Racing Commission (TRC) did the state’s racetracks another solid by refusing to repeal rules authorizing so-called ‘historical’ racing at horse and dog tracks. Also known as ‘instant racing,’ the slots-like video terminals have been growing in popularity in other states as tracks look for ways to offset declining revenues.

The TRC approved historical racing one year ago but no machines have yet been installed because legislators felt aggrieved that they hadn’t been consulted on what they perceived to be an expansion of gambling. A court eventually ruled that the TRC lacked the authority to make such decisions on its own, a decision some of the state’s tracks have appealed.

The TRC was put in a pickle. Repealing the language from its rules would have undercut the tracks’ legal appeal, but legislators were threatening to withhold the TRC’s operating budget should it not do as they instructed.

In the end, the TRC voted 4-3-1 to keep the historical racing language in their regulations. They now face the possibility that they’ll have no money to keep the lights on after Sept. 1, when its annual funding runs dry. This seems unlikely, given that the TRC’s shutdown would require the state’s tracks to also close. But this is Texas, after all.