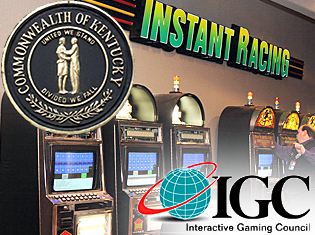 Kentucky courts had their minds on gambling this week, as judges handed down fresh rulings on two long-running cases. On Friday, the Kentucky Court of Appeals unanimously reversed a lower court decision barring the Interactive Gaming Council (IGC) from intervening on behalf of the companies whose 141 online gambling domains were seized by the Commonwealth of Kentucky in August 2008.

The domains were seized based on the Commonwealth’s claim that the sites’ owners weren’t doing enough to block Kentucky residents from gambling online and therefore represented illegal “gambling devices” subject to forfeiture. Nine of the domains were subsequently dropped from the proceedings due to legal actions brought against them by the US Department of Justice, leaving Kentucky to pursue further action against the remaining 132 domains.

The IGC and the Interactive Media Entertainment and Gaming Association (iMEGA) had waged a long procedural war with the Commonwealth over their right to intervene in the case on behalf of the companies whose domains had been seized. The Commonwealth had previously adopted a group approach to their forfeiture action but changed to a process of individual actions after the IGC sought to intervene on the sites’ behalf.

On Friday, the Court of Appeals ruled that the Commonwealth couldn’t change the rules midway through the game. The Court found that IGC’s efforts were “directed toward the entire forfeiture procedure, not toward issues affecting individual ownership interests” of each seized domain. The Court said the Commonwealth’s attempt to compel each domain owner to “come forward individually and assert virtually identical legal arguments through separate counsel” simply to ascertain the validity of the forfeiture procedure “would be burdensome and inefficient.” The case has been sent back down to Franklin Circuit Court for further review.

SPLIT RULING ON INSTANT RACING
Kentucky officials have routinely cited a desire to protect the Commonwealth’s horse racing industry as justification for seizing the domains. In 2010, the Commonwealth took a further step to boost its domestic industry by allowing racetracks to offer ‘instant racing’ i.e. electronic video devices showing previously run races in which just enough of the pertinent data is obscured to prevent punters from using their elephantine memories from gaming the system.

Critics like the Family Foundation of Kentucky argued that since instant racing didn’t require punters to actually watch the race all the way through to determine whether they won or lost, they essentially amounted to slot machines, which aren’t authorized under Commonwealth law. To date, only two tracks – Kentucky Downs and Ellis Park – are offering instant racing to their patrons, as other tracks decided to hold off until the legal smoke had cleared.

On Thursday, the Kentucky Supreme Court ruled that the Kentucky Horse Racing Commission had the authority to license and regulate instant racing. Justice Daniel Venters said the Court couldn’t “conceptually” say that watching archived footage of races “makes the event any less of a horse race than watching a re-run of a basketball game makes it something other than a basketball game.”

However, while the Commission was found to have the right to regulate the wagers, the Court said it lacked sufficient info to ascertain whether instant racing wagers were actually legal. Existing law restricts Kentucky residents to playing the ponies, bingo, lotteries and pull-tabs. The Court sent the issue back to Franklin Circuit Court to determine whether instant racing met the legal definition of “a pari-mutuel form of wagering.”

Venters also said the Department of Revenue had no legal authority to collect taxes on instant racing, as Commonwealth law restricts the taxman to collecting excise taxes on “live” race wagers. Venters said the justices “simply cannot bend and stretch the English language far enough” to equate races that took place years ago as a ‘live’ event. The Department has so far collected around $8.6m in taxes from instant wagering and officials are currently reviewing the ruling to determine whether they’ll now have to refund this money.