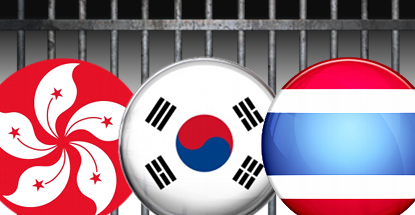 Authorities in South Korea have broken up an internet gambling operation posing as an online shopping network.

On Sunday, the Korea Times reported that the Seoul Metropolitan Police Agency (SMPA) had arrested four individuals for their involvement in the ring, which involved 30 different illegal gambling sites taking wagers from Korean punters. The sites, which were disguised as online shopping businesses, were operated from within China in a bid to avoid detection by South Korean authorities.

Park claimed the site had a client roster of around 20k gamblers, who used fake names to avoid police connecting their bank account activity with the sites. Park reportedly operated the sites from Shenyang in China’s Liaoning province, although he used his share of the profits to live in a “luxurious” house back home in Busan.

The ringleader, a 30-year-old named Lee Dong Sup, said he paid each of his three underlings THB 50k ($1,400) per month to operate the online sports betting site. Like the other South Koreans arrested under similar circumstances this year, Lee claimed that he’d chosen to base his operations in Thailand due to its relative leniency towards online gambling prosecutions compared to South Korea.

HONG KONG BUSTS ONLINE BACCARAT RING
Wrapping up a very busy weekend for Asian authorities, police in Hong Kong raided four locations linked to illegal land-based and online baccarat operations. Police made numerous arrests and confiscated close to HKD 1m ($129k) in gambling chips and cash, with some of the latter described as commission fees for the online site operator. Police claimed at least one of the raided sites was under the control of a local triad group,