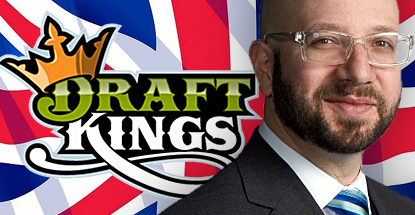 In June, DraftKings confirmed that it had applied for a UK Gambling Commission (UKGC) license as part of its international expansion efforts. On Monday, DraftKings announced it had received its new UK diploma and the company expects to launch in the UK sometime in Q4 2015, with plans to launch in markets in continental Europe, Asia-Pacific and Latin America next year.

DraftKings will open its new London office by the end of this year with a full complement of around 20 staff members. Managing this UK rabble will be Haas (pictured), who has been named DraftKings’s new Chief International Officer. Haas, the longtime director of poker operations for Bwin.party digital entertainment, left that company in July while hinting of a ‘new adventure.’

Unlike the US, where DFS activity is tacitly tolerated in the majority of states – although its actual legality remains untested – fantasy sports is considered ‘pool betting’ in the UK and thus falls under the oversight of the UKGC. DraftKings’ rival Yahoo recently partnered with UK-licensed fantasy football (soccer) operator Mondogoal, further underscoring the sector-wide push to establish a global fantasy footprint.

DraftKings CEO Jason Robins called Monday’s announcement “a milestone moment” in his company’s growth. Robins said it would “add new sports and games to our burgeoning roster of offerings” and DraftKings would follow its US strategy of signing marketing partnerships with sports teams, leagues and media outlets.

DraftKings’ UK expansion was made possible by its recent $300m funding round, but expansion will only get tougher from hereon in, as the company’s owners are running out of equity to sell. DraftKings and its archrival FanDuel have essentially been buying market share via a frantic sponsorship arms race that has left both companies unable to turn a profit until a critical mass of players can be coaxed into the DFS pool.

That competition for players’ hearts and minds will get even more heated now that Amaya Gaming’s PokerStars brand has entered the DFS fray via its acquisition of Victiv, although Amaya has sensibly opted to keep its marketing powder dry until the player pool expands.