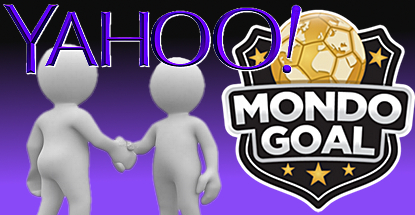 Yahoo’s DFS site, which debuted last month, is currently limited to Major League Baseball contests, although it has promised to add NFL, NBA and NHL contests once those sports commence their respective seasons. The Mondogoal deal will allow Yahoo to diversify its current sport options while expanding its horizons beyond the North American market.

Yahoo’s Mondogoal-hosted and -managed DFS football service launched last Friday. The UK market will be the primary focus of the site, trading on Mondogoal’s existing partnerships with English Premier League sides Chelsea, Liverpool, Tottenham Hotspur and West Ham United. But the service will offer DFS contests for cash wherever such activity is permitted.

Forbes reported that the two parties have agreed upon an undisclosed revenue sharing arrangement that doesn’t require Mondogoal to front any money. Players who sign up for the service via Yahoo will be counted in the revenue sharing formula, while players who stumble across the site without Yahoo’s assistance will be excluded.

Mondogoal’s favorable terms can be explained by Yahoo’s lack of a real-money gambling license – the kind rival DraftKings has applied for in the UK and which Mondogoal already possesses. Mondogoal will also likely appreciate the opportunity to use Yahoo’s heft to help solidify its UK market position before DraftKings officially arrives on the scene.

DRAFTKINGS, ESPN MERGE DAILY AND SEASON-LONG FANTASY
The North American DFS market is utterly dominated by the NFL, and the industry’s major players are bracing for an epic fight for DFS hearts, minds and wallets when the season kicks off on Sept. 13.

DraffKings has already made waves with its opening week $10m Millionaire Maker, the biggest contest the sector has ever witnessed. It costs $20 to enter and there’s a cap of 572,500 entries, with first prize earning $2m and $1m for the runner-up.

Not to be outdone, DraftKings and its new media partner ESPN have concocted a way to merge the DFS and season-long fantasy worlds. On Wednesday, ESPN announced that the ESPN Fantasy Football League Manager who earns the most fantasy points in DraftKings’ Week One Millionaire Maker will receive $1m to split with all the members of his ESPN season-long league (or leagues).